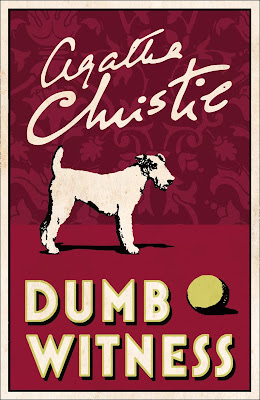 An elderly spinster has been poisoned in her country home. Everyone blamed Emily’s accident on a rubber ball left on the stairs by her frisky terrier. But the more she thought about her fall, the more convinced she became that one of her relatives was trying to kill her.

On April 17th, she wrote her suspicions in a letter to Hercule Poirot. Mysteriously he didn’t receive the letter until June 28th… by which time Emily was already dead.

A very intelligent book by one of my all time favorites, Agatha Christie. I’ve been on a reading and reviewing spree of Christie books, lately, as you can see on the homepage of this blog.

I am glad to say this was one of the few Christie books where I kept up with the proceedings, and at one point I even noticed something before Poirot did! It does make me proud, honestly. I cannot explain how wonderful it is to be able to do that. I very rarely can with Christie books, though sometimes I have come close.
Emily Arundell, though dead for pretty much the entire book, is quite a forceful character and her personality was quite strong, if not her health. It was quite curious how the whole thing came to be, and I don’t think anyone but Poirot could have solved it!

I love how Christie creates an ensemble cast of characters, each person very well-sketched out, and with their own natures and flaws. It made for an extremely interesting read because it wasn’t just about how or who did the murder – the looming question was whether it was a murder at all! It’s uncanny how Poirot realized that there was something shady from a (very late) letter. He’s not one of the best fictional detectives ever for nothing!

It has a very neat conclusion, with all loose ends tied up very well. One of the best Christie books I’ve ever read.