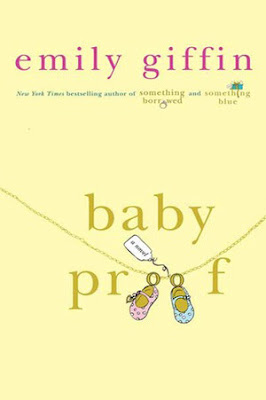 From the author of the smash hits Something Borrowed and Something Blue comes a novel that explores the question: is there ever a deal-breaker when it comes to true love?First comes love. Then comes marriage. Then comes . . . a baby carriage? Isn’t that what all women want?Not so for Claudia Parr. And just as she gives up on finding a man who feels the same way, she meets warm, wonderful Ben. Things seem too good to be true when they fall in love and agree to buck tradition with a satisfying, child-free marriage. Then the unexpected occurs: one of them has a change of heart. One of them wants children after all.This is the witty, heartfelt story about what happens to the perfect couple when they suddenly want different things. It’s about feeling that your life is set and then realizing that nothing is as you thought it was—and that there is no possible compromise. It’s about deciding what is most important in life, and taking chances to get it. But most of all, it’s about the things we will do—and won’t do—for love.

First off, I liked that Ms Giffin wrote about a protagonist not often seen in chick lit. She is child-free by choice, and unrelenting in her beliefs. I appreciated the strong start to the book. She meets and marries Ben, a good, wholesome guy. They’re perfect for each other; he also doesn’t want children. Until he does.

Without any sort of mature discussion, they get divorced. I mean, atleast maybe talk about it? Discuss, go to couples counseling or something? Find out why he suddenly changed his mind. See if there’s something you can do that does not involve compromising your principles, Claudia. But no. Apparently divorce is something that happens super easily, and so they have a quick one. I suppose they could have talked about it like the mature 30-something adults they are supposed to be. But then we wouldn’t have a book!

Claudia somewhat quickly falls into a semi-fling-relationship-undefined thing with some guy. He’s a not quite boyfriend and she’s still pining over Ben. She herself is doing all sorts of things with some other dude, yet obsessively stalks people on Google when she thinks Ben might be with someone else.

Along the way, we meet her sisters Daphne and Maura, and her best friend Jess. All of them seem to have issues with either men or kids or both. All this baby talk makes her resentful. Listening to her sister’s real issues make her resentful. Other people in a happy relationship make her resentful. She is often envious and jealous, too. Overall, she doesn’t really seem like a nice friend or sister, because she cares about these people, sure but also all the resentment she harbors.

On top of that, she has a tendency to create scenarios in her head and build up entire emotional responses based on nothing more than a hunch. It is not exactly how you expect mature adults to behave. They’re supposed to communicate, right?

Even then, I did like the book overall. There were definitely some good things there. It was a quick, easy read. I did like Something Borrowed and Something Blue by the same author, so that’s probably coloring my opinion, because I started out wanting to like this book already.

And I like that even though Claudia was unlikable, many of her reactions were fairly realistic. I know that people sometimes do live in their heads and imagine things. I know that they can be self centered. I know that sometimes people don’t communicate in a straightforward fashion, even though they should. And it could be for any combination of reasons.

That doesn’t negate that most everyone is still trying to be a good person. I get it. And that’s why with all the logical flaws in this book, I still like it. Because it is kinda real. This is how real people behave. Nobody is cookie cutter. Life isn’t always neatly tied up. It’s messy and real, just like this book.