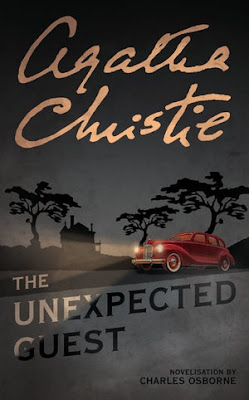 The Unexpected Guest by Agatha Christie
3.5 of 5 stars

A thriller as well as a puzzler set in a foggy estate in Wales. This mystery opens as a stranger walks away from his ditched car toward a country manor to find a man murdered and his wife standing over him with a gun. But the woman is dazed and her confession unconvincing. The unexpected guest decides to help her and blame the murder on an intruder. Later, the police discover clues that point to a man who died two years previously and a pandora’s box of loves and hates, suspicions and intrigues is opened to the night air.

Originally written by Agatha Christie as a play in 1954, now rendered as a novel by Charles Osborne, The Unexpected Guest is a compelling tale of murder and deceit sure to entertain and amuse fans of Christie worldwide.

The one phrase I will always use to describe any Christie book is ‘well written’. She is an absolute wonder and one of the most unbeatable authors ever in my opinion.

The Unexpected Guest is one of her rare works that was first written as a play, as opposed to many of her stories where the plays were adapted from books or stories. It was very well received, and with good reason.

The family relationships​ are quite intricate, there is conflicting feelings towards the deceased basis self preservation, familial pride, and plain loyalty. There is of course misdirection; it being a Christie novel, this is to be expected. I was quite taken by the narrative, as well as the individualistic characters. And also, what drives them to say and do the things they do.

I also quite liked the inspector and the very poetic Sergeant. It added a light-hearted dimension to the story.

Of all the Christie novels I’ve read, this is the first where the criminal goes unpunished. This​ isn’t really a spoiler because I’m not disclosing anything about the story line or murderer per se, so I think it’s fine to elaborate on this.

I’m sure she had good reason to make that decision, and the more I think about it, the more I find it to be justified. I don’t think, as a reader, I’d have it any other way.

It is not a Poirot or Miss Marple book, but it is still a great story without either of these beloved characters.

A good book for a cozy evening.