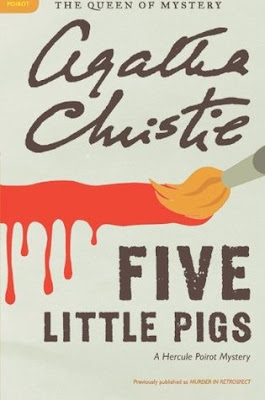 It was an open and shut case. All the evidence said Caroline Crale poisoned her philandering husband, a brilliant painter. She was quickly and easily convicted and sentenced to life in prison.
Now, sixteen years later, in a posthumous letter, Mrs. Crale has assured her grown daughter that she was innocent. But instead of setting the young woman’s mind at ease, the letter only raises disquieting questions. Did Caroline indeed write the truth? And if she didn’t kill her husband, who did?To find out, the Crale’s daughter asks Hercule Poirot to reopen the case. His investigation takes him deep into the conflicting memories and motivations of the five other people who were with the Crales on the fatal day. With his keen understanding of human psychology, he manages to discover the surprising truth behind the artist’s death.

A gem by Agatha Christie. This one has a unique premise, in that Poirot takes up a 16 year old case, where both the victim and alleged murderer are both long dead.

The daughter of the accused went to Poirot for help in order to clear her mother’s name. Why didn’t Poirot help the family during the accusations and trials? Why, he was not in the country of course! Ms. Christie thinks of everything.

Poirot follows up with the witnesses, and gets varied opinions of the accused from all of them. There are many differing opinions about Caroline Crale, but most do believe that she was the one who killed her husband.

This story is an interesting study of character personalities, and how Poirot – with his keen interest in psychology – draws his own observations. There is a bit of conflict in the impressions of the five little pigs (the witnesses), but that is to be expected, as it was a 16 year old memory for all these people. Red herrings abound, as does misdirection.

After speaking to all these people personally, he also asks them to write down their recollections. We then proceed to read the same occurrences from five different perspectives. It is a bit of a toss-up here, because you might not like the repetition. However, it is by no means monotonous, and there’s always something new to discover in each written narrative.

It also puts dysfunctional relationships in a new light, and reminds you that things do not necessarily have to be the way they seem. I love when Agatha Christie writes solid psychology based books. As Poirot says,

“One does not, you know, employ merely the muscles. I do not need to bend and measure the footprints and pick up the cigarette ends and examine the bent blades of grass. It is enough for me to sit back in my chair and think.”
Definitely worth a read if that kind of thing interests you.
View all reviews | Are you a writer?