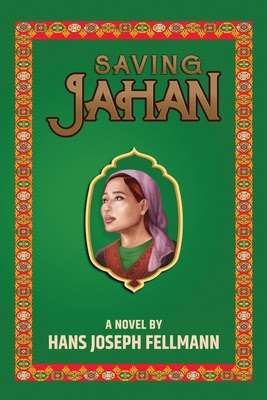 Book Blurb:
A PEACE CORPS VOLUNTEER in Central Asia finds purpose in helping a friend escape a life of servitude.

Johann Felmanstien is going nowhere in life. He has no money, no job, no girl, and a degree that would look better as a doormat than on his CV. He applies for the Peace Corps and is accepted. His country of service is the Central Asian republic of Turkmenistan, which is seventy percent desert and run by a totalitarian dictator with a cult of personality.

Johann is sent to teach English in a town to hell and gone. He contemplates leaving until he meets a local teacher with a strangely similar name called Jahan. Over time, she opens up about her dreams to live abroad and the struggle she faces in a country that sees women as little more than servants. Johann takes a passive stance at first. But as his work suffers because of his shenanigans and alcohol abuse, he realizes that helping Jahan escape Turkmenistan might be the only way to save himself.

Book Review:
The story revolves around Johann and his life in Turkmenistan. A young graduate from America who signs up with Peace Corps as a volunteer, finds himself teaching English in a remote village and living with a family whom he despises. The story talks about the shenanigans, the binge drinking sessions and partying, the loneliness, almost coming close to losing your mind, and living like a hobo. The story shows you that you don’t need to be trying and doing a million different things, but sometimes just one meaningful thing is enough, and that is what Saving Jahan is all about.

The book portrays the lifestyle and cultural differences, daily difficulties and how next to impossible it is to make a dream come true in Turkmenistan. The place where people struggle to get out of, because either their English isn’t good enough, or beacuse of their family’s poor finances, or simply because they’re held down by political policies. The rich and powerful can manipulate their way into leaving the country whereas the others are just left to fend for their poor lives. Life might be monotonous, but it’s not all bad in Turkmenistan. The sunsets and the night skies are a sight for sore eyes and the currency exchange value is pretty crazy. You can pretty much live comfortably with a few hundred bucks!

I was really pleased how Johann doesn’t budge from his initial goal of completing his service and sticking around despite difficult conditions. I admire his courage to tell his dad about how he wants to become a writer and pursue his love for languages. I loved the self-discovery part where he realises that he had made an impact in the lives of the people around him including his colleagues, friends, the kids he taught and most importantly, his host family, in his own way.

The characters he encounters are quite memorable and the readers might even find the events relatable. Be it getting drunk and passing out with all the other Corps volunteers, or getting in trouble with the authorities, the companionship Johann receives during his tenure in Turkmenistan is pretty awesome.

Jahan – his colleague at the school where he teaches – dreams of traveling, exploring and getting the hell out of Turkmenistan is held back because of her sick mother. Despite having multiple siblings, the duty to provide for her family is thrusted upon her. Johann tries his hardest and convinces Jahan to apply for a position at the Peace Corps that might help her achieve her dreams in the future. Little does he know about the hardships of Jahan’s past and what she had to endure to be where she is today.

The language used in this book is quite detailed, dirty, intense and at times comical. The descriptions of food are not for the faint of heart and queasy of stomach. However, he is a good person at the end of the day. He cried over the death of a pet! He taught whatever he could to whomever wanted to learn, and tried to help as best as he could. He learnt the language and tried his best to fit in with the people and the culture. Most importantly he does all he can to save Jahan.

Final thoughts: I’d recommend this book to anyone who enjoys learning about other countries, languages, cultures, the Peace Corps, and also for fans of first hand experiential memoirs of sorts, even if it’s semi fictionalized like this one.

Trigger warnings: Mentions of rape, sexual assualt, grotesque descriptions of food and other things too, sometimes to the extent of gore. Also often abusive language, but in the sense of a description or adjective, not actually abusing someone, in most cases.

*A review copy was provided to Oh Just Books by the author in exchange for an honest review*
View all reviews | Are you a writer?