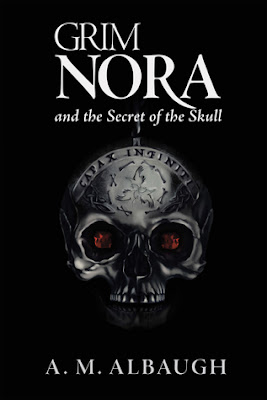 Grim Nora and the Secret of the Skull by A.M. Albaugh

Book Blurb:
When Nora Youngblood’s father dies on her sixteenth birthday, it’s the end of everything she ever knew. But a new journey begins with a skull-shaped pocket watch – the last gift from her father, a professor of archaeology. Where did this mysterious trinket come from, and why would a warlock named Kabos now be hunting her for it?

Nora, now an orphan, finds protection under a wizard named Malachi, his handsome apprentice, Aidan, and a brother she never knew she had. As she learns the truth about her family’s mysterious past, Nora seeks to uncover the secret of the skull, which leads to both a powerful and dangerous weapon. With the fate of the skull in her hands, she’s lured into the hidden world of Dubhgail to combat the treacherous Kabos – who has kidnapped her brother. Can she sacrifice herself to save her brother and her friends?

In this fantasy novel, a teenage girl discovers her magical heritage and soon finds herself facing the might of an evil warlock in another world.

Book Review:
A lovely book that tied up loose ends even though it’s clearly meant to be part of a larger series. The best way I could describe this book is an engaging epic fantasy that has a different narrative style and structure than what we are used to. This may be good or bad depending on what you tend to expect out of the books you read. From personal experience, however, I can say that even if you start out thinking this isn’t your style, you will likely change your mind. It’ll probably grow on you like it grew on me.
Grim Nora and the Secret of the Skull is very fast paced – which is good as the story doesn’t drag – but also, it means that things are sometimes touched upon on a surface level and the narrative doesn’t really go as in-depth as it could in terms of characterization. The characters are slightly one dimensional sometimes, and it’s strange how easily they accept situations. I would’ve liked to see a character growth arc but nobody except for Nora and maybe a couple of others got one, and even hers was too abrupt at certain points. It’s absolutely fine in terms of the plot unfolding and the speed at which it does so, but this is a slight jarring note in an otherwise well structured tale.
Considering that the story is pretty layered, it had the potential to be built into a slightly larger book if sufficient breathing space was given between events. However, this point seems really subjective, because readers who prefer getting right into the action and quick progress in a story will absolutely love it. I just personally prefer a little build up to the action, but of course your preferences may vary.
In my opinion, the way the story is structured means that events unfold super quick and the mystery for the reader is, in a way, removed – because things are solved before the reader starts to question them. I think if allowed time and space within the pages to do so, readers would be even more invested. A bit of pacing would work wonders, as the universe is pretty well thought out as well.
I realize I’ve focused on narrative style and speed through this review so far, and this is somewhat intentional. It’s such a big part of any story that I can’t help but focus on it when it jars a bit. You may have noticed I have still given this story 4 stars. This is because it actually is a really well-written epic fantasy with a broad range of characters, an overarching story line, depth, feelings, and magic. I would most definitely read more books by Albaugh, no doubt. The only thing that stopped me from giving it a full 5 stars was the pacing.  Not that as I progressed through the book, the writing style started to grow on me and to an extent, I actually enjoyed the quick pacing and reveals in the story.
It’s a different style than most fantasy or YA books follow, but the uniqueness is a bonus, as is the very thorough and thoughtfully created universe. I can confidently recommend this book and say that it’s certainly worth a shot, and is quite likely to be enjoyed across age groups
*A review copy was provided to Oh Just Books by the author in exchange for an honest review*
View all reviews | Are you a writer?