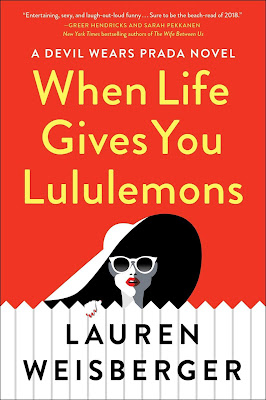 When Life Gives You Lululemons by Lauren Weisberger

Welcome to Greenwich, CT, where the lawns and the women are perfectly manicured, the Tito’s and sodas are extra strong, and everyone has something to say about the infamous new neighbor.


Let’s be clear: Emily Charlton, Miranda Priestly’s ex-assistant, does not do the suburbs. She’s working in Hollywood as an image consultant to the stars, but recently, Emily’s lost a few clients. She’s hopeless with social media. The new guard is nipping at her heels. She needs a big opportunity, and she needs it now.

Karolina Hartwell is as A-list as they come. She’s the former face of L’Oreal. A mega-supermodel recognized the world over. And now, the gorgeous wife of the newly elected senator from New York, Graham, who also has his eye on the presidency. It’s all very Kennedy-esque, right down to the public philandering and Karolina’s arrest for a DUI—with a Suburban full of other people’s children.


Miriam is the link between them. Until recently she was a partner at one of Manhattan’s most prestigious law firms. But when Miriam moves to Greenwich and takes time off to spend with her children, she never could have predicted that being stay-at-home mom in an uber-wealthy town could have more pitfalls than a stressful legal career.


Emily, Karolina, and Miriam make an unlikely trio, but they desperately need each other. Together, they’ll navigate the social landmines of life in America’s favorite suburb on steroids, revealing the truths—and the lies—that simmer just below the glittering surface. With her signature biting style, Lauren Weisberger offers a dazzling look into another sexy, over-the-top world, where nothing is as it appears.

I am so glad about this book! I absolutely loved The Devil wears Prada. But then Revenge Wears Prada turned out to be such a shallow and disappointing book that I was unsure whether this book, the third in an admittedly loose trilogy, would stand up to the first one’s acclaim and reputation.

While it isn’t as amazing as the first one, it is still much better than the second. I really enjoyed really this. Emily seems like a better person now. I mean she’s still a trash talker and very blunt, but you can see she’s got a good heart. Not sure if she was like that in book 2, which I have successfully repressed from memory.

The main characters – Emily, Miriam and Karolina are very well-fleshed out characters. I really liked Miriam, she was a lawyer turned suburban mom who was just trying to figure out the harrowing life in Greenwich with fancy neighbors and insane, over the top parties. She’s friends with both Emily and Karolina, and that’s where the main story comes into play.

Karolina got a DUI when she wasn’t even drinking – a very public fall from grace, leading to her husband completely writing her off without hearing her side of the story. He had presidential aspirations, after all.

Emily, the PR queen that she is, sets out to clear Karolina’s name and bring back her good reputation. Karolina, however, only cares about custody of their son, not her reputation. But as Emily says, for a public figure like Karolina, the two are tied together inextricably. And thus begins the process, uncovering secrets and stories and a whole lotta Manhattan drama. All from the suburbs.

All of them also have their own little stories going on, which makes this story quite more layered than you would expect. At the end of the day, its fun and breezy chick lit. Miranda Priestly makes an appearance, God bless. I wish Lauren Weisberger would just write more stuff about Miranda. It’s a sure shot way to ensure all of us will read and love it.