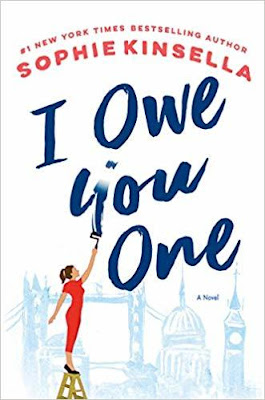 I Owe You One by Sophie Kinsella

From #1 New York Times bestselling author Sophie Kinsella, an irresistible story of love and empowerment about a young woman with a complicated family, a handsome man who might be “the one,” and an IOU that changes everythingFixie Farr has always lived by her father’s motto: “Family first.” But since her dad passed away, leaving his charming housewares store in the hands of his wife and children, Fixie spends all her time picking up the slack from her siblings instead of striking out on her own. The way Fixie sees it, if she doesn’t take care of her father’s legacy, who will? It’s simply not in her nature to say no to people.So when a handsome stranger in a coffee shop asks her to watch his laptop for a moment, Fixie not only agrees—she ends up saving it from certain disaster. Turns out the computer’s owner is an investment manager. To thank Fixie for her quick thinking, Sebastian scribbles an IOU on a coffee sleeve and attaches his business card. But Fixie laughs it off—she’d never actually claim an IOU from a stranger. Would she?Then Fixie’s childhood crush, Ryan, comes back into her life and his lack of a profession pushes all of Fixie’s buttons. She wants nothing for herself—but she’d love Seb to give Ryan a job. And Seb agrees, until the tables are turned once more and a new series of IOUs between Seb and Fixie—from small favors to life-changing moments—ensues. Soon Fixie, Ms. Fixit for everyone else, is torn between her family and the life she really wants. Does she have the courage to take a stand? Will she finally grab the life, and love, she really wants?

I usually love Sophie Kinsella books, but this one, unfortunately, didn’t cut it for me. I am obviously not going to stop reading any of her books. Just that this wasn’t the best, you know?First of all, Fixie was such a doormat and I really did not appreciate that. She seems incapable of standing up for herself in literally any situation. It’s just crazy and I can’t believe anyone would let things go to that extent. But she does, because her dad always said family comes first. Let go of everything for the sake of family. But she has a really really annoying family. Her mom is great, but that’s about it. Her siblings, Nicole and Jake, walk over her all the time and she let’s them.And then there’s Ryan. Idiotic Ryan. Hated the dude and Fixie doesn’t seem to understand how useless he is. Takes her ages to get it. Seb was also a confused character. Why would you go back to whiny instead of communicating like a damn adult, when you’ve been able to converse perfectly fine otherwise. You’re going to take the word of a guy you know is an idiot over someone who you know is honest and kind? Thought Seb was smarter than that, honestly. Of course, Fixie eventually fixes it. It being all the issues that happen over the course of the book that I won’t get into because spoilers.Not one of Kinsella’s better works. It ends well, as we expect from the author, but it was so frustrating they way they all treated her for a large part of the book.If it wasn’t a Kinsella book I would have left it for later, like way later. But I knew it would end well so I kept at it. Which didn’t disappoint but also didn’t make up for it, if you know what I mean.