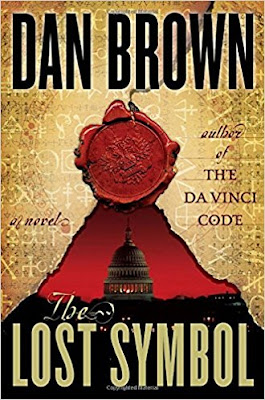 The Lost Symbol by Dan Brown
Rating: 4 of 5 stars

WHAT IS LOST…
WILL BE FOUND.
In this stunning follow-up to the global phenomenon The Da Vinci Code, Dan Brown demonstrates once again why he is the world’s most popular thriller writer. The Lost Symbol is a masterstroke of storytelling – a deadly race through a real-world labyrinth of codes, secrets, and unseen truths…all under the watchful eye of Brown’s most terrifying villain to date. Set within the hidden chambers, tunnels, and temples of Washington, DC., The Lost Symbol accelerates through a startling landscape toward an unthinkable finale.

As the story opens, Harvard symbologist Robert Langdon is summoned unexpectedly to deliver an evening lecture in the U.S. Capitol Building. Within minutes of his arrival, however, the night takes a bizarre turn. A disturbing object – artfully encoded with five symbols – is discovered in the Capitol Building. Langdon recognizes the object as an ancient invitation…one meant to usher its recipient into a long-lost world of esoteric wisdom.

When Langdon’s beloved mentor, Peter Solomon – a prominent Mason and philanthropist – is brutally kidnapped, Langdon realizes his only hope of saving Peter is to accept this mystical invitation and follow wherever it leads him. Langdon is instantly into a clandestine world of Masonic secrets, hidden history, and never-before-seen locations – all of which seem to be dragging him toward a single, inconceivable truth.

As the world discovered in The Da Vinci Code and Angels & Demons, Dan Brown’s novels are brilliant tapestries of veiled histories, arcane symbols, and enigmatic codes. In this new novel, he again challenges readers with an intelligent, lightning-paced story that offers surprises at every turn. The Lost Symbol is exactly what Brown’s fans have been waiting for…his most thrilling novel yet.

I’ve read most of Brown’s books and I always come away enthralled. The attention to detail is striking. I realize there have been many controversies surrounding his works, and I am fully aware of how many accomplished authors look down on him and disregard his books, too.

But I have to say – it takes skill to weave fiction with so much basis in fact and reality. His stories draw you in and you don’t want to put the books down until you’ve finished them. Yet they are not books you can rush through. They’re books that you read carefully, with attention to detail.

The Lost Symbol is no different. There are multiple subplots and everything ties together beautifully at the end. This book makes us join Robert Langdon on his journey once more and I must say, I sure do like the guy. His healthy skepticism is what we, as readers, would be feeling. Often I’ve had questions whilst reading, which have immediately been asked by Langdon in the book, too – and I do receive fairly satisfactory answers.

I didn’t much like the eventual revelation – the whole reason this was all drawn out. Sato’s involvement did become clear eventually, but I just didn’t like what it all lead to. It didn’t give me the kind of satisfaction that Digital Fortress or Deception Point gave me, as a reader.

Nevertheless, this book is different from others in the Langdon universe, in that it gives hope. It shows how thinking transforms reality, and the effect that knowledge has on people. It is fast paced, packed with information, and it tries to open your mind.

This book has also sparked my interest in Noetic Sciences and I am going to do a bit of research of my own on it too. It is a new field of science – but essentially one of the oldest, too. It is about harnessing the power of your thoughts to create physical manifestations of those thoughts – in essence, creating reality through focused perception.

A little about Noetic Sciences:

A good place to start is the Wikipedia Link – https://en.wikipedia.org/wiki/Institute_of_Noetic_Sciences
Wiki often gives a good, if shallow, overview of a given topic, so check it out before you dive in.

And their explanation of Noetics in their own words – http://noetic.org/about/what-are-noetic-sciences

Edgar Mitchell, a co-founder of the Noetic Sciences Institute, is a former astronaut who is instrumental in facilitating research in the field. He experienced a transformative awakening when he was in outer space on the Apollo 14 mission. You can read his interview here and another blog post on him here.