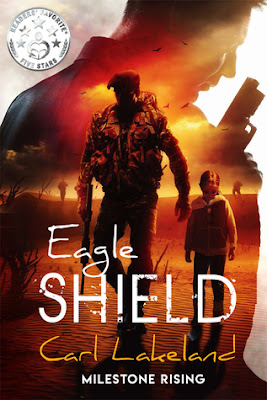 Nathan is issued with a new mission.

Objective: Relocate the Asset to the safe house in Melbourne.

Objective: Protect the computer disk at all costs.

A trained killer must learn to forget everything he has come to know as a well beaten path. He must become both father and protector to an orphaned ten-year-old girl.

A girl with a special gift and a destiny, who will change the course of history and human-kind. Nathan must oversee Angel’s upbringing. He must see to it that Angel is groomed and prepared for her induction into ASIS as an adult. At the same time, he must maintain the security of the disk. The stolen intelligence leading to MILESTONE.
That was the plan. It went so wrong.

It feels like you’re watching a movie, except it’s so much better.

Eagle Shield follows Nathan Masters, a trained killer who takes up a mission to protect an asset. An asset that could potentially lead to the downfall of mankind or the opposite. They believed in him to do it. Oh boy were they wrong. Things went bad quicker than you imagined.

An action-packed book that is quick paced but written with precise descriptions. While reading the book, I spent most of my time imagining the events that happened in my head as if it was a movie, however, I was left disappointed as a movie can never describe it half as well as Lakeland had. The action scenes were intense, half the time I don’t know exactly what happened except for gunshots and explosions – it was wild!

Eagle Shield was written in a way that makes you feel involved with the story. This book will keep you on your toes and you’ll be wondering who is and isn’t telling the truth. There are so many secrets and so many things that are private, you can’t help but to want in on a little sneaky information. If you’re up for a jam-packed book filled with actions scenes on every page yet leaves you craving for more, you know where to go.

I love the way Lakeland wrote Nathan’s past. Not only does each event reveal Nathan’s character, it also plays a part in his mission. I really like the interaction between the characters, especially between Nathan and his friends from camp (except for the swearing and cursing but it totally adds to their character). Through each line, you can see that Angel is much more important to Nathan than the Eagle Shield mission. Who would’ve thought that he’d be like this, I’m pretty sure even Nathan himself did not expect it.

As I’m reading the story, I find myself more emotionally invested in the characters’ personal lives. I want to know them better, listen to their backstory and find out who they really are. There are still some questions left unanswered that might be addressed in the second book in the series, or it might not even be raised at all. It is the characters that make you want to continue reading and it has been a while since I’ve read a book like that.

Personally, I really liked it because of Scotty Blue and also because of how fast-paced the story was. However, I don’t think I care about the mission that much. The plot was great and the idea was developed really well. I also found the last scene to be extremely intense, there were so many things happening and every time something goes right, so many other things could go wrong. However, it could be that I do not see Amber’s true value yet. I understand that she is the asset but so far, I don’t get it.

I’d also like to add that the cover art is absolutely amazing. The colours complement the story and it is really eye-catching. This book has been an absolutely pleasant read and I’m excited about Project Amber, the next book in this series!

This review written by – Jo
Hello there, you can call me Jo or Puffer! I am a passionate reader who has many opinions about books and would love to discuss about books with others.