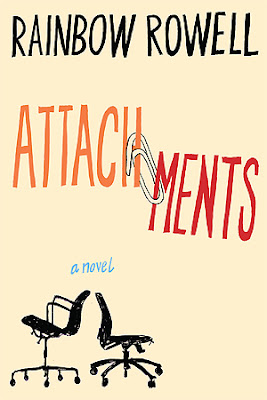 Beth Fremont and Jennifer Scribner-Snyder know that somebody is monitoring their work e-mail. (Everybody in the newsroom knows. It’s company policy.) But they can’t quite bring themselves to take it seriously. They go on sending each other endless and endlessly hilarious e-mails, discussing every aspect of their personal lives.

Meanwhile, Lincoln O’Neill can’t believe this is his job now- reading other people’s e-mail. When he applied to be “internet security officer,” he pictured himself building firewalls and crushing hackers- not writing up a report every time a sports reporter forwards a dirty joke.

When Lincoln comes across Beth’s and Jennifer’s messages, he knows he should turn them in. But he can’t help being entertained-and captivated-by their stories.

By the time Lincoln realizes he’s falling for Beth, it’s way too late to introduce himself.

What would he say…?

I have a love/hate relationship with these sweet love stories. I love reading them but I hate it when they’re over because you’re back to earth – you’ve been unceremoniously pulled out of the dreamy fictional landscape, into real life where boys don’t quite match up. It was pretty much the same in this book too, as far as romance goes.

In terms of the novel itself, I really enjoyed the epistolary narrative – I don’t think we have quite enough of those books today. They’re absolutely wonderful and I can’t seem to get enough. So I really liked Attachments in this sense too.

The characters were very well written, and the main characters, Lincoln and Beth, were both adorable in their own ways. They way they came to like each other and they way they thought of each other and spoke to each other was just awesome. One thing I didn’t like was that you’re kind of led to being that Lincoln is a geeky IT chap but he turns out to be this super cute hunk. I mean, what. That doesn’t seem very fair, overall. Misleading readers, I thought! But then I thought maybe it was because geeky IT chap is how Lincoln sees himself. And super cute hunk is how Beth sees him. And it just highlights a difference in their perspectives. And that’s beautiful.

I loved Lincoln’s mom – she’s super sassy and speaks her mind. I did not much like Jennifer – she was complaining about the possibility of pregnancy pretty much throughout the entire book, and Beth often was an unwitting enabler because Jennifer just wanted to wallow and refused to listen to an honest viewpoint.

I also didn’t like that Lincoln was so hung up on Sam but I think that’s just because I was waiting for the meet-cute to happen already!