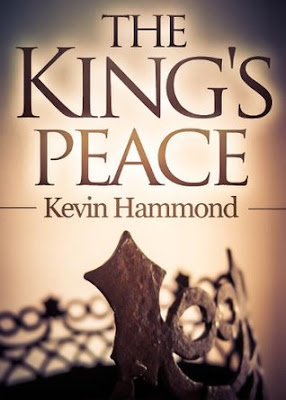 The King’s Peace by Kevin Hammond
Rating: 3 of 5 stars

The Kingdom is young and yet it stands in great peril. Dark tales of the unnatural have reached the King’s city. The King is slain in his bed and the storm on the horizon brings black ships closer to the coastal city of Erenon.

Nathaniel, a clever thief has stumbled upon a job that brings him to the home of the King when he is slain and Nathaniel is unwillingly dragged into the quest to reach the southern garrison which has gone quiet in recent months.

Strange powers are helping and hindering him and the small company of soldiers dispatched to that garrison as war comes to the city. They will find those horrors that plague the common man, an ancient dragon legend will unravel, and a deception so epic in scale it involves the Gods. The whole world of man and nations who live on the other side of the mountain range known as the Great Divide will come together in a war no one really understands and as the kingdom fights to survive it will face an enemy they know nothing about.

Erenon is about to turn into a dark country, filled with disappearances of children, mythical creators and endless terror for the villagers. With the King’s murder and the chaos that runs wild in the country, who is brave enough to save them?
Hammond writes about a kingdom named Erenon and the adventures of a thief named Nathaniel who was in the wrong place, at the wrong time. Nathaniel is forced to join the soldiers to find the King’s nephew – the heir to the throne. Not welcomed by many and being called as a lowly ‘thief’, Nathaniel didn’t make many friends. There were no friends to be made, of course, with such a devastating future before them. On the journey, many were sacrificed, perceptions were altered and conflicts occured.
It was a slow start. Hammond took a long time to build up the reader’s understanding of Erenon. He spent time polishing the background to the story and the views in the kingdom of Erenon. The setting was well developed, however, there were a few grammatical and spelling errors as well as punctuation mistakes that were overlooked during the editing process.

Nathaniel was an incredible main character. He was a skilled thief and was far braver than the troops. He had such admirable integrity towards a task that he was forced into. I also love the way the author made the main character relatable by giving him fears and making him flawed. The interactions between characters obviously show that they aren’t buddies for life but rather have one goal in mind – the King’s Peace. This was a brilliant way, on the author’s part, to enhance on the soldier’s drive and loyalty to the King.

Overall, The King’s Peace is a dark story with mythical creatures, eerie surroundings and gory acts that will surely spark your interest if you’re sick of fantasy books that are too predictable and that involves unnecessary romance.

This review written by – Jo