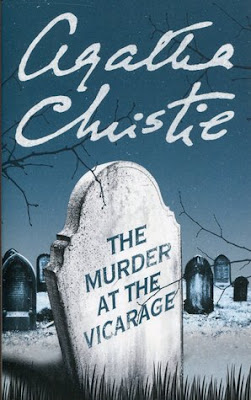 Murder at the Vicarage (Miss Marple #1) by Agatha Christie

Book Summary:
Murder at the Vicarage marks the debut of Agatha Christie’s unflappable and much beloved female detective, Miss Jane Marple. With her gift for sniffing out the malevolent side of human nature, Miss Marple is led on her first case to a crime scene at the local vicarage. Colonel Protheroe, the magistrate whom everyone in town hates, has been shot through the head. No one heard the shot. There are no leads. Yet, everyone surrounding the vicarage seems to have a reason to want the Colonel dead. It is a race against the clock as Miss Marple sets out on the twisted trail of the mysterious killer without so much as a bit of help from the local police.
Book Review:
The first Miss Marple book, and what an introduction to the character! I do like Miss Marple and her incisive deductions, as much as I like the way she speaks and shares her insights into the case at hand.Looking like a harmless old lady doesn’t hurt either! A true Christie tale, set in a small village with an ensemble cast, such that any one of the multiple people could be the murderer! Old Protheroe was disliked by pretty much everyone in St. Mary Mead, and it was anyone’s guess who the actual murderer was. On top of that, people kept going and confessing to the police about it! A right mystery, and a fitting vehicle for Miss Marple’s debut. Miss Marple figures it out with such detail that the culprit pretty much gets caught in her scheme-y web. A very interesting read, and I appreciated the little insights into what happened to some of the other characters in the book as well, after the perpetrator was apprehended. A great read, and I absolutely breezed right through it.
View all reviews | Are you a writer?