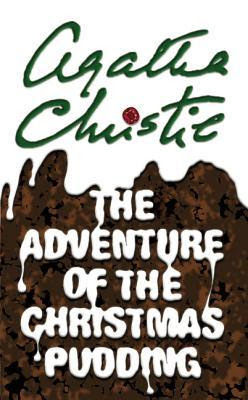 The Adventure of the Christmas Pudding by Agatha Christie

Agatha Christie’s seasonal Poirot and Marple short story collection, reissued with a striking new cover designed to appeal to the latest generation of Agatha Christie fans and book lovers.The Adventure of the Christmas Pudding (a.k.a The Theft of the Royal Ruby)The Mystery of the Spanish ChestThe Under DogFour and Twenty BlackbirdsThe DreamGreenshaw’s Folly

Book of short stories by Agatha Christie. Fairly sure I’ve read it before, but it’s been absolute years since then, so it’s kinda new to me anyway. All of the stories include Poirot or Marple. I wonder what would happen if the two of them ever met! Which bus makes me want to read some miss Marple books. I’ve been reading a lot of Poirot, generally. The Adventure of the Christmas Pudding – in the preface, Christie mentions how much she loved the traditional English christmases, and this story exquisitely describes it. The mystery was a neat little thing, and Poirot wrapped it up equally neatly. Even in short stories, Christie fleshes out all the characters in an ensemble cast exceedingly well. Fun read. The Mystery of the Spanish Chest – beautifully written, and I especially liked the character of Margharita. The hints and allusions about Othello made this story even more enjoyable. I really liked how Poirot figured it out, and the lengths humans go to due to jealousy. The Under Dog – the title should have been a clue for me, but it wasn’t. Maybe you will figure it out, though! A story about womanly intuition and Poirot’s wily ways.Four-and-twenty Blackbirds – Poirot figured out a mystery just from a change in eating habits of a regular visitor to a diner. This is a great example of why Christie is my favorite mystery writer. The Dream – Tiny hints that only Poirot could’ve made sense of! A well thought out crime, except nobody really counted on the Belgian detective to be such a genius. I think this story shows one of Poirot’s quickest solutions to a crime. Greenshaw’s Folly – A Miss Marple story! I do need to read more of her stuff. Short and interesting. I feel the other Poirot stories were better, though.Overall, a nice little collection of short stories.