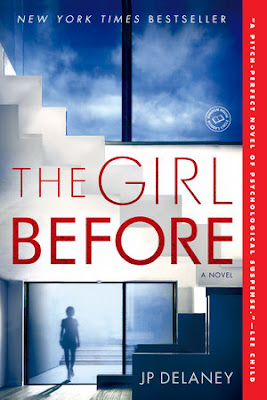 The Girl Before by J.P. Delaney
4 of 5 stars
Book Details:
Please make a list of every possession you consider essential to your life.The request seems odd, even intrusive – and for the two women who answer, the consequences are devastating.EmmaReeling from a traumatic break-in, Emma wants a new place to live. But none of the apartments she sees are affordable or feel safe. Until One Folgate Street. The house is an architectural masterpiece: a minimalist design of pale stone, plate glass, and soaring ceilings. But there are rules. The enigmatic architect who designed the house retains full control: no books, no throw pillows, no photos or clutter or personal effects of any kind. The space is intended to transform its occupant – and it does.JaneAfter a personal tragedy, Jane needs a fresh start. When she finds One Folgate Street, she is instantly drawn to the space – and to its aloof but seductive creator. Moving in, Jane soon learns about the untimely death of the home’s previous tenant, a woman similar to Jane in age and appearance. As Jane tries to untangle truth from lies, she unwittingly follows the same patterns, makes the same choices, crosses paths with the same people, and experiences the same terror as the girl before.
Book Review:
This is a psychological thriller about what happens when an obsession with minimalism goes too far.
It’s about a beautiful house, One Folgate Street, which is an ode to stark minimalism. A stunning house with low rent. What’s the catch? You have to be approved by the architect himself, who is also the owner of the house. Edward Monkford. And it isn’t easy to get approval.
You have a list of around 200 conditions on the contract, a questionnaire, a bunch of photos to send, and finally an in person interview. Some of the conditions are nice but some are like no books or pets or IKEA type furniture or cushions or pictures. That was pretty funny and illuminating simultaneously.
This novel is from the point of view of Jane, who lives there now, and the titular girl before, Emma. Although there was another girl before that, Edward’s wife, Elizabeth. She didn’t really stay at One Folgate Street though, so maybe technically it’s only about Emma in this aspect.
I enjoyed the narrative, which revealed bits of both timelines simultaneously, eventually catching up to the truth of what happened to Emma, as well as what’s going to happen to Jane.
Both women are well fleshed out characters, even though they might not seem that way initially. Dominated as they are by Edward, they may seem like they’re helpless damsels, but over the course of the story they go through experiences that create dramatically different reactions and reveal (sometimes diametrically) opposite personalities.
It is left ambiguous, perhaps intentionally, about whether the stark, minimalistic interior puts them more in touch with themselves, or if it is the house affecting their moods and behaviors. Yes, the house is capable of that. It’s in the contract that they have a right to study you for their research about building similar houses. If something is cheap, you pay for it in other ways.
It was a good read, but I didn’t really find closure about the story. I don’t mean to say there were ignored threads or anything – the story arc was pretty good, but it just wasn’t enough. I would have liked a more emphatic end to the story. I did appreciate how Jane’s story played out. That was the best part of how the ending was written, and I understand that it is based on something close to the author’s heart, personally. Don’t wish to reveal more, but you’ll see if you read the book cover to cover.
Barring that, it’s a pretty nice book, and an interesting take on the current trend with minimalism and sparking joy. So yeah, keep your house clean, but don’t be so obsessed about it.
As one of the characters says, you can keep your house as flawless as you want, but what about the mess in your mind? That should always be infinitely more important, otherwise all you’re doing is projecting.
View all reviews | Are you a writer?