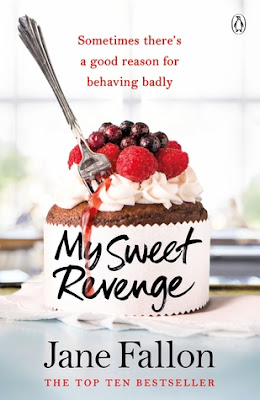 My Sweet Revenge by Jane Fallon
Rating: 3 of 5 stars

I want to make my husband fall back in love with me.

Let me explain. This isn’t an exercise in 1950s wifeydom. I haven’t been reading articles in old women’s magazines. ‘Twenty ways to keep your man’. That couldn’t be further from the truth.

I want him to fall back in love with me so that when I tell him to get the hell out of my life he’ll care. He won’t just think, ‘Oh good’.

I want it to hurt.

Paula has had Robert’s back since they got together as drama students. She gave up her dreams so he could make it. Now he’s one of the nation’s most popular actors. And Paula’s just discovered he’s having an affair.

She’s going to remind Robert just what he’s sacrificing. And then she’s going to break his heart like he broke hers. It will be her greatest acting role ever.

Revenge is sweet. Isn’t it?

Just discovered Jane Fallon and so absolutely glad that I did. It is a fast paced, enjoyable read and I liked the breezy feel of the story.

The premise is that Paula’s husband is cheating on her and she wants to make him fall back in love with her, after which she’ll dump him! I wanted to see how that played out, but I’m going to stay spoiler free on that point.

The book alternated between two POVs, Paula and Saskia. Saskia is the “other woman”, so to speak.

In Paula’s defense, Robert does seem kind of ungrateful, so I understand where she’s coming from. Don’t know how or why losing weight in tied into her plan of making him fall in love with her again. Apart from being nice to his (supposedly insufferable) sister, that is. I did quite like the sister, Alice, though. She seemed like one of those people you wouldn’t mind being friends with; all floaty and eccentric.

I enjoyed Saskia’s POV more. She seemed like a more interesting character, even though she was the bad guy here.

As for Paula, I did like that she started to take care of herself and eat healthier and exercise. I liked that it helped her self esteem to do so. Paula started to grow on me through the book. I didn’t like her much as first because I got a self-pitying vibe from her, whether or not that was the author’s intent. I personally felt that way. But she did grow on me and by the end of the book I quite liked Paula.

I really liked how it ends. All critiquing apart, it was an easy, enjoyable read and I read it pretty quickly. Chick lit is one of the genres I devour the fastest and this is a good specimen of the genre. All things considered, it’s worth a one time read.