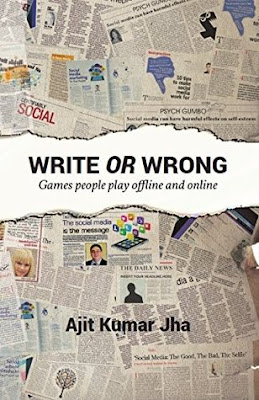 Write or Wrong by Ajit Kumar Jha
My Rating: 4 of 5 stars

Book Summary:
While working under a stern publisher who dealt with his staff like a military commander, the protagonist said something to the publisher that made him start sweating in the month of December. What did he say? What did the astrologer who claimed to have served under Subhash Chandra Bose in the INA and predicted the time of death of some Indian political leaders, reveal to the protagonist?

The publishing world is changing rapidly today, when everyone is a writer and reader alike, and getting published can be a cakewalk. Read on…

Book Review:
Write or Wrong takes us through two journeys – one, that of the protagonist; and the other, that of the publishing world through the years.

This book gives off a vibe of autobiography with liberal amounts of humor. While the protagonist narrates his various experiences in life, he is also chronicling the history of publishing industry, its exponential growth which eventually dies down, only to give way to the online world. Instead of simply stating the facts in a grey tone, the author paints us a flamboyant picture of this rich history through his life experiences with a touch of philosophy and fun.

The protagonist, whose name we never learn during the course of the book, believes that his career course was set by a promise that he made to his teacher in fifth grade to become a writer. Destiny makes sure that unlike his contemporaries from the army school, he does not join the Defense Academy but goes on to study philosophy; fate intervenes again as he tries to clear civil service exams vehemently but fate points him to copy writing. And thus begins his career that enlightens the reader about the truths of the huge industry of publishing.

While I enjoyed the book a lot, I wish the summary of the book did more justice to the book or made me want to pick it up initially. This was a chance experiment that turned out to be a delightful experience. This book deserves a better blurb in my opinion. So if you are looking to read this book, please do not be put off by the summary. It is definitely an inspiration to anyone who one day wishes to publish their own work and is interested in a writing career.