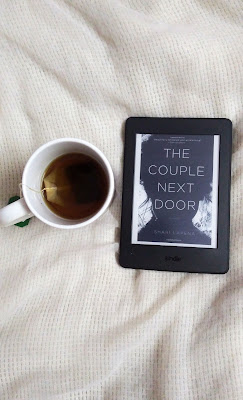 The Couple Next Door by Shari Lapena

It all started at a dinner party. . .

A domestic suspense debut about a young couple and their apparently friendly neighbors–a twisty, rollercoaster ride of lies, betrayal, and the secrets between husbands and wives. . .

Anne and Marco Conti seem to have it all–a loving relationship, a wonderful home, and their beautiful baby, Cora. But one night when they are at a dinner party next door, a terrible crime is committed. Suspicion immediately focuses on the parents. But the truth is a much more complicated story.

Inside the curtained house, an unsettling account of what actually happened unfolds. Detective Rasbach knows that the panicked couple is hiding something. Both Anne and Marco soon discover that the other is keeping secrets, secrets they’ve kept for years.

What follows is the nerve-racking unraveling of a family–a chilling tale of deception, duplicity, and unfaithfulness that will keep you breathless until the final shocking twist.

The Couple Next Door is a very acclaimed and popular psychological thriller by Shari Lapena. Having heard many good things about this book, I was looking forward to reading this tale of domestic noir.

From the very first page, there is intrigue and suspicion. And then the unimaginable happens, and the story only continues it’s fast pace and aura of intrigue.

A tight, well written book, it evokes a sense of urgency in you. It’s unputdownable. I read through this book in a couple of days – whenever I had free time, I picked it back up. This book definitely has a quality that draws you in and makes you want to keep reading in order to figure out exactly what is happening, and who can and cannot be trusted.

One thing I must say, and I don’t think it counts as a spoiler because I’m not really disclosing anything about the plot or even character traits, is how unlikable I found literally everyone.

Not one character had my sympathy, and you would fully expect Anne and Marco to have the readers’ sympathy. Maybe other readers may have had a different experience, but for me, it was a no go. I want to feel something for the characters in a book; at the very least, I want to be able to empathize with, relate to, or like the protagonists. I felt none of those things for our main couple.

True, there were times when I felt a little sympathy or even felt bad for someone, but it was far less than I would have expected, considering the situation they were in.

And after all this, the ending. The insane ending that I still don’t know what to make of. I don’t know why the author chose to end it this way, and as far as I know there isn’t even a sequel to explain it. I’m not saying it’s a cliffhanger – I definitely do not like books that end that way, so I would have mentioned that in a review. No, it isn’t a cliffhanger but it’s still so weird and out there that I’m not sure why it had to be this way. Actually taking off another 0.5 stars for that.

Overall, a good example of the genre and fast paced enough to make me like it. However, I didn’t love it, pretty much because of how unlikable I found the characters and the weird ending, but admittedly it doesn’t seem to be a common refrain among readers of this book, so take it with a pinch of salt. Well written with a tight story-line, The Couple Next Door is decent domestic noir and I enjoyed reading it.