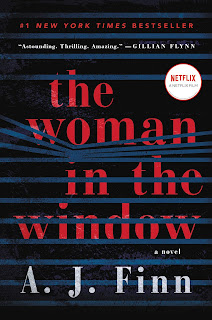 The Woman in the Window by A. J. Finn

Anna Fox lives alone, a recluse in her New York City home, unable to venture outside. She spends her day drinking wine (maybe too much), watching old movies, recalling happier times . . . and spying on her neighbors.

Then the Russells move into the house across the way: a father, a mother and their teenage son. The perfect family. But when Anna, gazing out her window one night, sees something she shouldn’t, her world begins to crumble and its shocking secrets are laid bare.

What is real? What is imagined? Who is in danger? Who is in control? In this diabolically gripping thriller, no one—and nothing—is what it seems.

Back to a favorite genre after a while. The Woman in the Window is a psychological thriller – suburban noir, you could say. Not exactly domestic noir, though. These sub-types of psychological thrillers are sometimes a bit much in terms of specificity/precision/minutiae, but I think they do help narrow it down when you’re looking for something specific to read.

So about the story- well written, starts off at a medium pace but gets more and more fast paced as the story progresses, which I think is a hallmark of this genre at this point. There was a twist i saw coming after a point, and one I totally did not see coming because I was pretty blindsided by the rest of it.

As in the vein of psychological thrillers in general, I can’t discuss much about the plot without risking spoilers, so I’ll stick to characters and general themes. However, I will mention one thing – Anna is an unreliable narrator. However, instead of this being a plot twist/spoiler, it’s a fact that’s woven into the fabric of this story from the very beginning. So what’s true and what’s not is up to you to figure out. Another book with an obvious unreliable narrator is The Girl on the Train, but I liked this book better.

Also, Agora is such an important part of the plot and her life, plus a really cool concept. I wonder if any similar groups exist for agoraphobia support.

Another thing I really liked about this book is how it humanizes the people in the story. For thrillers, it’s often hard to balance the story with the fact that they’re talking about people with emotions and different ways to handle and deal with things.

Apart from the thriller/noir part of the story, I liked how they showed how alone someone can be, even with a support system that genuinely cares about them. It also brings up how hard it is to change unless you really truly want to, and sometimes you don’t want to for whatever reason and that’s okay too. It’s okay to take your time.

I saw the movie immediately after but that’s a different post. I’ll link back here once I’m done ruminating over this.