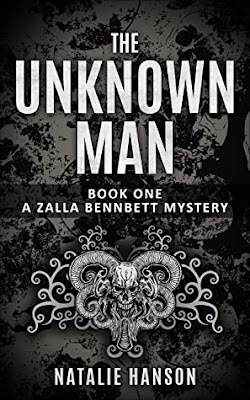 The Unknown Man by Natalie Hanson

It took just a tiny bit more matter than antimatter for the big bang to produce the entire universe. Born with an abnormality that manifests through her body, imbalance is something Zalla Bennbett understands. Her ability to sense out lies gives her an advantage on FBI investigations, but sixteen years in, both her marriage and career are on the rocks.

Zalla is assigned to work the kidnapping of an FBI informant’s young twins. With no evidence or leads, her suspect is deemed ‘The Unknown Man’. She’ll have to fight against her instincts to find the girls before time runs out.

Such an interesting concept about an abnormality that involved our main protagonist, and how it informed her life choices and her position as a profiler for the FBI. The story starts off strong, and we get an insight into Zalla’s mind. We also understand the details of the physical abnormality she has, as mentioned in the blurb. The concept of chaos and asymmetry crop up in different ways in this book as a sort of running theme.

The kidnapping case she was sent to solve was complicated – a bit more than she accounted for. For that matter, it was more than the FBI accounted for, because they only sent one person to deal with it – Zalla. From the beginning she mentions needing more resources, but her boss Jessica was being petty and resentful, and that was also something that affected the progression of a story. Not just that, there are many small incidents in this story that point towards human foibles and how emotion and luck play a greater role in life than we can ever imagine. The overarching plot is about her search for “The Unknown Man”, the person who has kidnapped the twin girls. Slowly she starts to uncover something much more sinister than she first thought was the case. Simultaneously, she’s also dealing with personal problems, including in her marriage.

She teams up with Dallon, a cop in the small town where the crime occurred, to solve the case and find the perpetrator. As the story progresses, we see so many twists and turns that it sends the mind reeling! When you read a crime thriller, you kind of expect certain twists, but this takes it quite a few steps further than anticipated. That’s a sign of a good thriller, in my opinion. The book starts off strong, as I’d mentioned before, and picks up pace even more at around the 60% mark where the story just progresses so fast that you’ll just tear through reading it as well. There’s a bit of a lull just before that, but hold on, because it’s certainly worth it.

I have to mention trigger warnings for some graphic content, but you’ll be able to see some of it coming and it does play a role in the story, so it wasn’t just thrown in for kicks. But still, it’s there, and unfortunately I cannot mention what it is without actually giving out spoilers, and you know how I feel about spoilers!

Overall, a well structured thriller that can definitely be turned into a Netflix limited series or something. I’d totally watch it.

*A review copy was provided to Oh Just Books by the author in exchange for an honest review.*