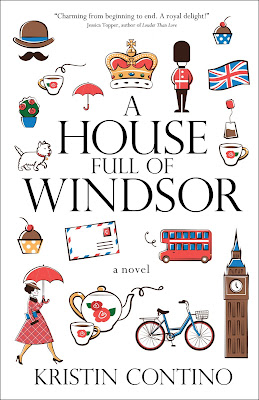 A House Full of Windsor by Kristin Contino

Book Blurb:
Spanning from 1980s London and the royal wedding of a century to a present-day reality TV show, A HOUSE FULL OF WINDSOR explores how one woman’s messy past shapes her family’s future.

Sarah Percy’s career depends on New Yorkers taking her household advice as gospel. “Sarah Says” used to be the most popular segment on the city’s top morning show, but ratings are down and it looks like Sarah might not have a tip for everything, after all… especially when her mother gets involved.

Debbie Windsor, Sarah’s mother, is a shopaholic and compulsive hoarder, a secret Sarah has worked tirelessly to hide her entire life. Debbie was always fascinated by royalty, but when her real-life love story started to parallel Princess Diana’s, she turned to collecting royal souvenirs to fill the void. Leaving her husband’s native England and relocating the family to her hometown in Pennsylvania doesn’t help the situation, and two decades later the house is a royal mess. Debbie’s safety is on the line, but she brushes off any attempts her family makes to help.

When Sarah’s brother gets a job on Stuff, a TV show about compulsive hoarding, he nominates their mother for an episode and promises his famous sister’s participation. Backed into a corner, Sarah and Debbie agree, but everyone has something at stake whether the episode does or doesn’t go off without a hitch. With both family and romantic relationships on the line–including the connection between Sarah and the show’s sexy host, and Debbie’s budding romance with a local shopkeeper –long-buried secrets and resentment must come to the surface for the family to move on.

Book Review:
A fun read about royalty, hoarding, reality TV, etiquette hosts, English manors, and American consumerism. How does it straddle so many topics? With ease and grace! The author, Kristin Contino, is well-versed in royalty as a whole topic, and knows pretty much everything there is to know about the royal family, and it shows. Who knew commemorative tea towels were a thing? Not me! This book just casually mentions so much royal stuff that I didn’t even know existed, and I kinda understand a bit more about the royal craze now.

In the same vein, I also did begin to comprehend Debbie’s mindset, which is insane because I never anticipated understanding a hoarder’s mindset or logic. I don’t even buy very many things to begin with in general. So to make sure readers see Debbie in a human, fallible way and not just as a hoarder was pretty big as well as supremely empathetic on Contino’s part. She approached the topic respectfully and it shows. Everyone has flaws; this just happens to be Debbie’s. She may be a hoarder, but that isn’t supposed to define her. As readers, we want to root for her because while we may not fully understand, we do get a glimpse into her mind. Plus, as the story pans out, we get to see how she turned into the Debbie of today. It doesn’t deeply address the psychiatric part of hoarding, but I wouldn’t really expect that from a chick lit novel in any case, so that aspect doesn’t disappoint me.

About that, I don’t know why or how this happened, but so many books I’ve been reading recently have involved either dual narrators, dual timelines, or both. This book has two narrators – Debbie and her daughter Sarah, as well as two timelines – present day Debbie and younger Debbie through the decades. It was pretty fun to see younger Debbie and her obsession with the lives of the royals, and it provided quite a bit of contrast to her daughter’s life at a similar age.

I shan’t get into plot details because obviously you’re going to want to read this chick lit with a twist, but suffice to say that apart from these two, the rest of the characters are also quite fun and well-written. Although I would have liked to see a bit more of present day Alan. The story flows well too and I’d love to see how Sarah’s life progresses from here onward.

Oh, and nobody named Santosh or Rekha is going to have the surname Khan. Get the token brown character right!

Overall, a fun story that’s easy breezy while still dealing with real issues. Good chick lit with a hoarding twist, lovely descriptions and likeable characters. And definitely read if you love the royals!

Thank you to Wyatt-MacKenzie Publishing and Netgalley for the e-arc.