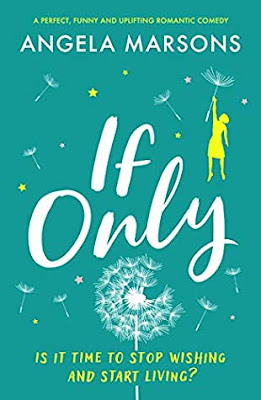 If Only by Angela Marsons

Book Blurb:
Find love. Have a baby. Ditch the mother-in-law from hell. Three best friends, each wishing for the one thing they want the most. But what if they’re searching for happiness in all the wrong places?

Cher is head over heels for her new boss. He’s gorgeous, smart and funny but he barely even notices her except to ask for a coffee refill. How can she get him to see that she’s the perfect girl for him?

Sarah is longing for a baby with the man she loves. The only trouble is David is already married. Will he finally leave his wife so they can be together?

Deb should be looking forward to her wedding with lovely fiancé Mark but with her mother-in-law from hell Margie taking control of everything, will her dream day turn into her worst nightmare?

So, when one summer evening, over several glasses of wine, Cher, Sarah and Deb stumble across an old book on Sarah’s shelf and drunkenly decide to cast a wishing spell, they don’t think for one minute that it will come true. It’s just three best friends having a laugh and throwing some herbs around the garden. Or is it?

Book Review:
Three best friends, three parallel story lines. I was in the mood for some chick lit after a mystery and thriller heavy reading schedule, so this Netgalley book was right on time!

So, I’ve never read Angela Marsons before, but I thought the name was familiar. Turns out she’s a popular crime writer, and this is her foray into chick lit. This book is well-written, no doubt due to her previous experience writing crime, which does require tight and engaging story lines.

I do love books with strong female friendships, so this book gets brownie points for that immediately. However, I didn’t love the women themselves very much. One of them was alright, but one was completely unaware of things to an extent that just wouldn’t be believable in real life. The third one gets so so many things wrong, and unfortunately, that is real-life-believable.

The plot addresses their personal and professional lives, so there’s two things going on for each girl. Marsons might also have chosen to go down the path of individual books for each one, but I’m actually glad she didn’t. All together, their stories are fun and engaging, but there wasn’t as much depth as you would expect from an individual-focused book. Maybe it’s because there were three stories in one novel. I’m not sure about the reasons, but I do believe it’s possible to give individual characters depth even in a short story. So it’s subjective and also dependent on what the writer chooses to focus on, and she probably felt it was more important to focus on the story and plot more than character development, and that’s okay too.

Their individual stories themselves were good, and the plot was fleshed out fairly well. The pace and setting was pretty good too, which I presume can also be credited to the author’s background in crime writing. I did appreciate the small wins they had through the story. I especially appreciated that they were there for each other through everything.

But..and this is a big one.. the blurb mentions them doing a spell and making a wish. I fully expected some cutesy incidents or mention of magic or strange happenings or something to do with the spell but nothing happened! The spell was just never mentioned again and I just did not like that decision because if it’s not a big enough part of the plot then why mention it in the blurb at all?

To be fair the last chapter does address it, but it just wasn’t as satisfying as it could have been if that spell/wish bit had a greater role to play in the story.

Overall, it was a breezy read. Not bad, but not spectacular either.

Thank you to Bookouture and Netgalley for the e-arc.