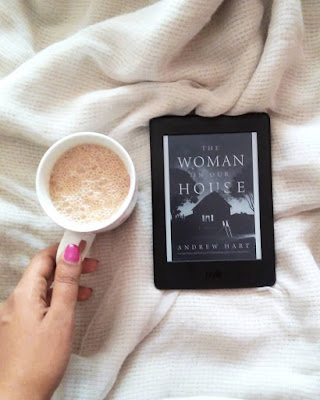 The Woman in Our House by Andrew Hart

Book Blurb:
What happens when you open your home to the perfect stranger?

Anna Klein is ready to return to work as a literary agent for the first time since having children. She and her husband, Josh, decide to hire a live-in nanny with some trepidation, but all their misgivings disappear as soon as they meet Oaklynn Durst. She has stellar references, a calm disposition, and a natural way with children. Not to mention their kids simply adore her.

But not long after Oaklynn arrives, the children start to come down with the most puzzling illnesses and inexplicable injuries. When the maternal Oaklynn is there to comfort everyone, Anna can’t help feeling a little eclipsed. And suspicious. Her husband and friends assure her that her anxieties are getting the best of her—Oaklynn is perfect. But Anna’s not so sure…

As she delves into Oaklynn’s past, she discovers too late that the woman who has been living in her house is not at all who she claims to be. But Oaklynn’s not the only one who has been lying. And when everyone’s dark secrets are forced into the light, the consequences may just turn deadly.

Book Review:
At pretty much the very beginning of this book we are introduced to the culprit, the troublemaker, the titular Woman in the House. I thought this was a bold narrative choice by the author, because if we know from almost the beginning, what’s the mystery? I mean sure there’s still suspense and buildup, but the payoff wouldn’t be that great, right? Wrong. There were twists. Oh, the twists.

This is the story of Oaklynn, a nanny who comes to work for the Kleins, Josh and Anna. Her role is to take care of toddler Veronica and baby Grace. But things start to go wrong. And then progressively worse. The kids get sick and injured multiple times, while Anna starts to get paranoid and distrustful about Oaklynn’s intentions. Add in Josh’s secret, an FBI agent, a girl named Maddie, and a very weird writer named Ben, and the story is layered and keeps you turning the pages well into the night.

As the story proceeds, the suspense gets tighter and tighter and we can actually feel how Anna’s feeling, and understand what she’s going through. At one point, I thought things were obvious. But I was wrong.

The story was beautifully twisty – some of the twists were obvious to me, so I was completely caught off guard when much bigger twists happened. I totally was not expecting those and hence was thrown off when certain things were revealed. I thought I knew and could predict with a fair amount of certainty what was to transpire next, but the author made sure that was not the case, and that’s what makes this book worth a read. I’d recommend it for sure.

Thank you to Lake Union Publishing and NetGalley for the e-ARC in exchange for an honest review.