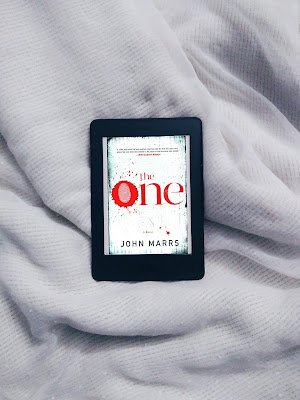 The One by John Marrs

How far would you go to find The One?

A simple DNA test is all it takes. Just a quick mouth swab and soon you’ll be matched with your perfect partner the one you are genetically made for.

That’s the promise made by Match Your DNA. A decade ago, the company announced that they had found the gene that pairs each of us with our soul mate. Since then, millions of people around the world have been matched. But the discovery has its downsides: test results have led to the breakup of countless relationships and upended the traditional ideas of dating, romance and love.

Now five very different people have received the notification that they’ve been “Matched.” They’re each about to meet their one true love. But “happily ever after” isn’t guaranteed for everyone. Because even soul mates have secrets. And some are more shocking than others…

A word-of-mouth hit in the United Kingdom, The One is a fascinating novel that shows how even the simplest discoveries can have complicated consequences.

Book Review:
What a crazy book. It was a different sort of narrative – five parallel story lines. Also, I’ve seen it called a scifi thriller, but it didn’t really feel very scifi to me. Thriller, yeah I guess so. Point it, I’m not sure what genre to put this book in.
The scifi aspect of this book is about how people can find their one true love, their destined soulmates, via their DNA. The premise is that everyone in the world has “the one” that is made for them, whose DNA has a particular gene pattern that matches with their significant other. With only one other person in the whole world. Truly made for each other, genetically.
The five parallel story lines are of our five main characters – Mandy, Nick, Jade, Christopher, and Ellie. Apart from these, there are a host of secondary characters and they’re all fairly well fleshed out. I got really attached to some of the characters, some I didn’t care about, and some I was surprised that I cared about because I wasn’t expecting to.
The book had a really tight story line, and kept me guessing what was going to happen next. Some twists I could predict, and some came out of the right field and I didn’t anticipate at all. All the stories were pretty engaging and some of the twists were quite shocking as well. Because of this, some story lines ended well and some disappointed me, but that’s just how it felt to me personally, and your opinion may very likely differ. Also, I can’t really elaborate on this bit, or any bit really, because spoilers abound if I get into discussing the story.
Overall, I enjoyed the book. It was fast paced and I’d find myself picking up the book in small pockets of free time over the past few days.
To be honest, I hadn’t heard of this book or even this author before, and only started reading it because there’s a Netflix show out now, and I wanted to read the book before I watched it. I’ll be reading more books by John Marrs, that’s for sure. I may not have enjoyed the conclusion of some of the parallel story lines, but that’s subjective. Plus, that doesn’t take away from the fact that he knows how to weave a fast-paced story.
I’ll watch the show soon and maybe do a comparison post, let’s see what the show is like first, though, before I decide. Or maybe I’ll do it anyway, but there’s probably going to be a lot of spoilers in it. Will update this post if I do!
View all reviews | Are you a writer?