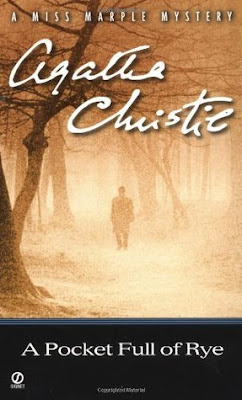 A Pocket Full of Rye (Miss Marple #7) by Agatha Christie

Book Blurb:
A handful of grain is found in the pocket of a murdered businessman! Rex Fortescue, king of a financial empire, was sipping tea in his ‘counting house’ when he suffered an agonizing and sudden death. On later inspection, the pockets of the deceased were found to contain traces of cereal. Yet, it was the incident in the parlour which confirmed Jane Marple’s suspicion that here she was looking at a case of crime by rhyme!
Book Review:
One of Christie’s best books, in my opinion. It felt like it had a lot more twists and turns than usual.Also, it really made for a deeper insight into Miss Marple’s personality. I always knew she was a wonderful, morally upright person, but this book showed me just how good a person she is.
Rex Fortescue is dead. And everyone seems like they could be the culprit. Miss Marple shows up to work with the police and save the day.And I know this is a mystery book and her writing style is probably why the term Cozy Mystery originated in the first place, but man, I laughed out loud at some moments. Christie has a great sense of humor, honestly.The letter at the end and her reaction to it was beautiful. The book ended like this –
The tear rose in Miss Marple’s eyes. Succeeding pity, there came anger—anger against a heartless killer.And then, displacing both these emotions, there came a surge of triumph—the triumph some specialist might feel who has successfully reconstructed an extinct animal from a fragment of jawbone and a couple of teeth.Absolutely love Christie so much.
View all reviews | Are you a writer?