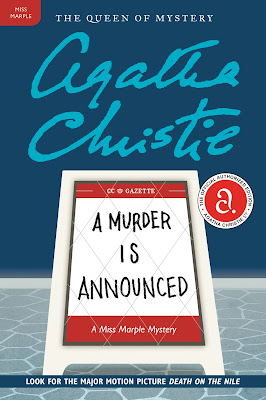 A Murder Is Announced (Miss Marple #5) by Agatha Christie

A murder is announced in a small-town newspaper advertisement—and Miss Marple must unravel the fiendish puzzle when a crime does indeed occur.The villagers of Chipping Cleghorn are agog with curiosity when the Gazette advertises “A murder is announced and will take place on Friday, October 29th, at Little Paddocks at 6.30 p.m.”A childish practical joke? Or a spiteful hoax? Unable to resist the mysterious invitation, the locals arrive at Little Paddocks at the appointed time when, without warning, the lights go out and a gun is fired. When they come back on, a gruesome scene is revealed. An impossible crime? Only Miss Marple can unravel it.

Halfway through reading this, I realized I read it many many years ago, so while I suddenly was hit with an awareness of who the culprit was, I still finished reading it anyway.It was fun to pick up on the small hints through the book, knowing what I already knew from my long ago reading of this book. It was enjoyable and reminiscent of another Christie book called After the Funeral (which is a Poirot book), in many little ways, but nothing that I could point out if you asked me to explain why I feel so.As usual, a great ensemble cast, and a wonderful story that draws you in. Each character is well fleshed out, as is the norm for Christie stories. By now, I think I’ve mentioned this fact so much that it isn’t surprising at all. Would probably be surprising if Christie didn’t make her characters lifelike. Haven’t yet come across any instance of that. Not as ‘breezy’ as some of her others, but I probably feel that because I didn’t get the chance to sit and read the entire book in one go, like I try to usually do for Christie books. It’s a pretty subjective point, anyway. I liked the book and the many nuances that you are more likely to notice on your second read.