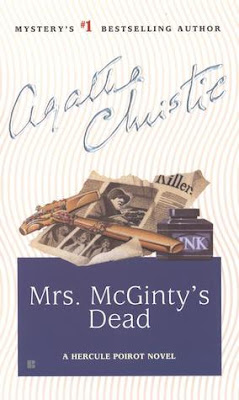 In this classic Hercule Poirot mystery from the Queen of Crime, a kindly widow is bludgeoned to death. Is her lodger guilty? Or is he being framed? Either way, the condemned man’s time is running out.“The plot is perfect and the characters are wonderful.” (San Francisco Chronicle)Well, it’s no wonder. The plot–suspicion for an elderly woman’s murder falls on her mysterious lodger–is from Agatha Christie. The wonderful character happens to be the world’s most famous sleuth, Hercule Poirot.

Mrs. McGinty’s dead, why did she die? Nobody knows, except the one person who did her in. At the risk of sounding repetitive, I’d love to tell you about how much I love the psychological studies that Christie features so prominently. Here too, we study the mind of a murderer.Not just the murderer of Mrs. McGinty, no! But the four women whose pictures have appeared in the newspapers. The women who have had tragic lives and circumstances, either of their own doing, or victims of those circumstances. And those women, so many years ago, have affected Broadhinny today. Because the troubles of Broadhinny are due to one of those pictures of one of those women. Who is it? Who lives in Broadhinny? And who is doing these murders? That’s what is baffling everyone. Poirot gets involved because the police, in particular Superintendent Spence, are doubtful about the main accused, James Buckley. Spence thinks he’s innocent, but all signs point to him. When nobody else can puzzle it out, Poirot comes in! Indeed, nobody even connected it with the “tragic women” till Poirot observed and inferred. He, too, finds it a tad difficult. He finds a lot of little clues and is himself misled by many seemingly minor observations, but in the end it all comes together beautifully!I also loved that there’s a call back to this book in Cat among the Pigeons. The Summerhayes’ house and the omelettes. If you read both books, you’ll see. The thing here is, it’s such a small part of either book and actually quite inconsequential, with no bearing on the story, but I so adore callbacks! Cat among the Pigeons was published after this one, so it comes later in the reading order.

Overall, one of the better Poirot books in my opinion.