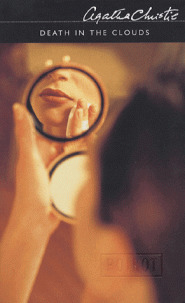 Death in the Clouds (Hercule Poirot #12) by Agatha Christie

A woman is killed by a poisoned dart in the enclosed confines of a commercial passenger plane…
From seat No.9, Hercule Poirot was ideally placed to observe his fellow air passengers. Over to his right sat a pretty young woman, clearly infatuated with the man opposite; ahead, in seat No.13, sat a Countess with a poorly-concealed cocaine habit; across the gangway in seat No.8, a detective writer was being troubled by an aggressive wasp.
What Poirot did not yet realize was that behind him, in seat No.2, sat the slumped, lifeless body of a woman.

A little different from the usual Christie novels – but how? I find that a tad difficult to explain. It is still an ensemble cast of Englishmen, foreigners, the rich, the poor, the guilty and the innocent. However, the approach was a tad different that Poirot’s usual. The premise is a murder on a flight. Nobody would’ve even noticed it was a murder at all – except for the fact that Poirot picked up on a few clues. From thereon, everyone on the flight was now an automatic suspect. Madame Giselle has been murdered, and apparently there were a few people on the plane who could have benefited by her death. But who was the greediest? Who benefits the most? Those are important points and Poirot is thrown off track fairly often. I actually think Poirot met a worthy adversary in this one. Poirot hasn’t actually been this confused in a while. Was he actually this confused, or did he just act like he was, though? Well, we know modesty isn’t one of Poirot’s traits, so we can’t be sure, but I personally do believe that the eventual culprit gave Poirot a relatively tough time while trying to figure it out.