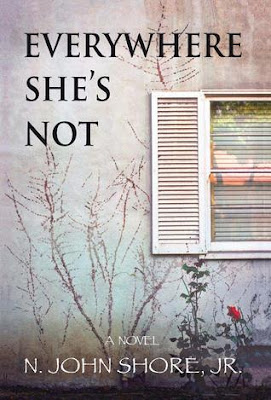 David is a brilliant young man living alone in an old seaside motel in San Francisco in 1979. He has just destroyed the life that he and his live-in girlfriend Kate spent two years building together.He has no idea why he did the terrible thing he did. All he knows is that he’s appalled he did it, and desperately wants Kate back.Fat chance. Kate, who loves David, is many things. Stupid isn’t one of them.“Everywhere She’s Not” is about crazy-making, mind-boggling, gut-wrenching love. It’s about how ultimately rewarding it can be to keep hoping, even when you know there’s no hope at all.It’s about passing through locked motel doors, travel brochures for ax-murderers, Cornish game hens playing lawn darts.It’s about helping your best friend, who is gay, pretend that he isn’t gay, so that his ex-wife won’t take away his child visitation rights.It’s about David Allen Finch finally facing the truth of who is family is, and what they’ve made him become—and what, if anything, he can do about that.

A wonderful debut novel by John Shore, Everywhere She’s Not has an engaging story line and well-fleshed characters. This is the type of book I read indie authors for. I was immediately drawn into David and Kate’s story. Set in early 80’s San Francisco, it gave me a peek into how life generally was at the time. The back and forth timeline narrative made it interesting, because we got to know more about both of them in bits and pieces. Both as a narrative device and from the point of view of a reader, it works. Shore is a talented writer, and the way he writes makes you feel like you’re right there with David and Kate, living their lives and feeling their feelings.David is a funny guy; sometimes humor comes to him naturally, and often he tries hard to be. Using humor to deflect your actual feelings is something certain kinds of people do. Conveying his attempts to do so is not an easy thing to write. Once again, Shore nailed it. I realize I’m complimenting the author as much as the story, but when you read the book you’ll understand. Many scenes are quite skillfully handled. I myself do dabble in fiction writing, so I look at books with that eye sometimes. To be fair I don’t often do that; I’m happy to be a reader and enjoy the plot and story arc. But some books, books like these, make me want to elaborate on that point of view as well.
The story starts with David breaking up with Kate, the love of his life. Out of absolutely nowhere, he tells her it’s over. He doesn’t understand why he even did it. He’s unable to explain it to Kate. Over the course of the book, David is on a journey of emotional self discovery and growth. He immediately regretted breaking up with Kate, and worse, has no idea why he did so. He needs to know why. And that requires some introspection.Since the story follows David, we get to know him more intimately than Kate, but she’s also a very real, true to life kind of character. We find out about her history and her life and the type of person she is. There is also a pretty good supporting cast, and every character, however minor, is still given a full, believable personality. Attention to detail makes all stories much better. I really liked Jerald, Franklin, Lillian and Brian. David and Kate may come from dysfunctional families, but their amazing friends are an unconditional support system. David grows as a character, coming to terms with his emotions, his reality, his life, and just growing up in general. Before you know it, you’ll be rooting for David and Kate to work out their issues and get back together. And it’ll be a satisfying read. At the end of the day, it’s about love.

*A review copy was provided to Oh Just Books by the author in exchange for an honest review*
View all reviews | Are you a writer?