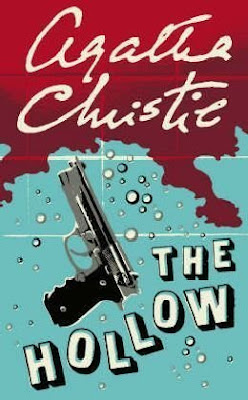 The Hollow by Agatha Christie3.5 of 5 stars

Book Details:
Lady Angkatell, intrigued by the criminal mind, has invited Hercule Poirot to her estate for a weekend house party. The Belgian detective’s arrival at the Hollow is met with an elaborate tableau staged for his amusement: a doctor lies in a puddle of red paint, his timid wife stands over his body with a gun while the other guests look suitably shocked.

But this is no charade. The paint is blood and the corpse real!

Christie described this novel as the one “I had ruined by the introduction of Poirot.” It was first published in 1946 in London. In the USA it was published under the title Murder after Hours. Christie adapted the novel for the stage though with the omission of Hercule Poirot.

I went in expecting typical Christie magic. I got it, true. Can’t deny that. But not in the way I wanted. Misdirection is at the heart of many Christie novels, and is a big part of why I love her books. However, I was unable to love this one the same way. Misdirected hints and plot points that feel like they might have a bearing on the outcome of the story are simply never mentioned again.

It is very unlike Christie to leave loose ends, so it was a jarring read in that sense. The first book of her’s where I wondered about it in this manner after I put the book away. I expect minor things and dropped hints to have a bearing on the story – that’s what we expect and love about Christie, at least that’s how it is for me.

Overall, the story was pretty good; ingenious, even. I enjoyed seeing how it all played out. It was one of the more unique reveals from her bibliography. In that sense, it was an enjoyable read. As usual, I am very appreciate of how well written her characters were, you could visualize them in your mind’s eye and get to know their behaviors, patterns and reactions. She wrote strong willed women and I have major respect for her due to that.

Apparently, Christie thought she spoiled this book by the introduction of Poirot, and though I can see how the book would still have been complete without him, I still appreciated the addition. That’s probably because I really like Poirot and Miss Marple and will read any book that has these two in them. Which reminds me, I haven’t read Miss Marple for a while..

Overall, a fun book. I still did enjoy it. It’s just that not tying up loose ends is something I do not expect from Agatha Christie. I’d still recommend reading it, though. After all, you may feel differently, of course.