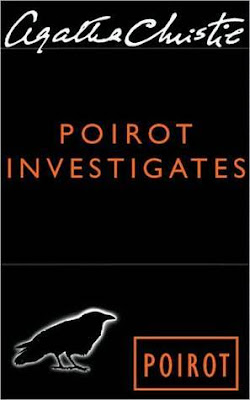 First there was the mystery of the film star and the diamond… then came the ‘suicide’ that was murder… the mystery of the absurdly cheap flat… a suspicious death in a locked gun-room… a million dollar bond robbery… the curse of a pharaoh’s tomb… a jewel robbery by the sea… the abduction of a Prime Minister… the disappearance of a banker… a phone call from a dying man… and, finally, the mystery of the missing will.

What links these fascinating cases? Only the brilliant deductive powers of Hercule Poirot!

A collection of short stories, each better than the next! This book was first published in 1924 and all of them feature Hastings as the narrator.

I like that Christie wrote full length novels as well as shorts – it isn’t easy for a writer to be good at both forms of narrative. This is actually her very first collection of short stories. All were previously published individually in magazines, and were collated in this book.

Misdirection is at the heart of most of these stories. The pacing and plot was tight, and for a couple of stories, they looked like they had enough substance to be expanded into a full length novel too.

However, as they were short stories, they were very concise and clear and made a wonderful set of bite-size Christie genius. It’s a great idea for those who haven’t read any Christie – a good way to introduce them to the wonder that this woman wrote.

Some of the stories I liked best (which I have to say, is most of them):
The Adventure of “The Western Star” – Misdirection and lies abound, along with samples of female vanity – 4/5
The Tragedy at Marsdon Manor – Very imaginative story with an enjoyable conclusion – 4/5
The Adventure of the Cheap Flat – Could be a longer novella, if not a full length novel. Rich backstory and characters – 4/5
The Mystery of Hunter’s Lodge – Exceedingly cunning perpetrators, so of course nobody but Poirot would have figured it out! – 4/5
The Adventure of the Egyptian Tomb – Can be presumed that this was inspired by the discovery of King Tut’s tomb in Egypt, as this story was written around this time – 5/5
The Jewel Robbery at the Grand Metropolitan – Wit. 5/5
The Kidnapped Prime Minister – This one definitely could have been a novel. A story like this deserves to be longer, and I would have enjoyed it more if it was. There was scope for much development in a longer format – 4/5
The Disappearance of Mr Davenheim – All I’ll say is you should definitely read it. wonderful twist, though foreseeable – 5/5
The Adventure of the Italian Nobleman – It’s always pretty fun how Poirot comes across such cases by fate, and smart criminals are apprehended because they just got unlucky having Poirot show up to save the day – 5/5
The Case of the Missing Will – Another testament to Poirot’s wit, and a “pretty problem”, as they say – 4/5
The Veiled Lady – Great angle, unexpected story and conclusion – 5/5
The Lost Mine – Another one which could have been a novella if she chose to flesh it out more, but keeping it concise made it well paced – 4/5
The Chocolate Box – A story of when Poirot actually failed! – 5/5
After writing this review, I checked out the book on Goodreads, and I learnt that the last 3 stories are extras that aren’t present in most editions – what I have is the 1924 American edition. So if the last 3 stories aren’t in your book, don’t be confused. They aren’t present in most.