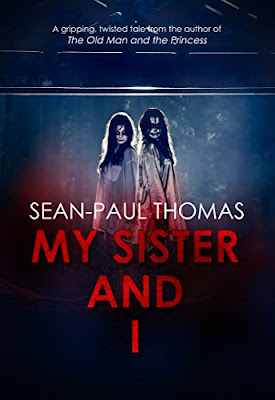 My Sister and I by Sean-Paul Thomas
Rating : 4 of 5 stars

‘From the author of ‘The Old Man and The Princess’ (Soon to be a major motion picture) – comes a new, dark and violent, gripping and twisted tale, of horrifying terror in the Scottish Highlands.’

A young teenage girl and her Psychotic twin sister must grow up hard and fast in the unforgiving Scottish Highlands as their father – a sick and twisted, violent man, obsessed with the end of the world – teaches them how to survive out in the wild with no one to rely on but themselves.

A young teenage girl and her twin sister have been growing up in the Scottish Highlands with their cruel and twisted father for as long as they can remember. A sick and violent, narcissistic man who is obsessed with the end of the world and one hundred percent convinced that an apocalypse is fast approaching.

Since they were old enough to walk he has been training and preparing the girls to survive in the wild, by taking them out into the brutal Highland terrain, sometimes for weeks on end, where he teaches them how to survive in a world without people and technology and how to hunt and kill, animals at first then humans later.

One of the sisters has her secrets though. And unlike her sinister twin who worships the very ground their dad walks on, she carries a hatred towards him and his way of life that slowly begins to consume her from the inside out. She harbors dreams of one day fleeing her father’s brutal, dictatorship grasp to live a normal, happy life in some far-off, safe haven place with her troubled sister and perhaps, even, their estranged mother too. A mother neither sister has seen nor heard from since their birth, and a mother that their father refuses to even acknowledge without striking out.

When the girls’ father decides to put the sisters through their biggest challenge yet, though, leaving the girls alone and to fend for themselves in one of the furthest and remotest regions of the Scottish isles, hundreds of miles from their home, the two inseparable sisters are given one last chance to make their father proud and convince him that they are finally ready to live in his vision of the new world.

But tensions soon escalate and spiral out of control between the two siblings and finally come to a devastating conclusion as the sisters are forced to make a series of brutal, life-changing decisions on their homeward bound journey, especially regarding where their opposite life paths are leading and where their true loyalties really lie. With their father or each other?

This is my first book by Sean-Paul Thomas and I was so intrigued by the first few pages, and I couldn’t stop reading it. I later found out that any single book of his is not indicative of all his writing because he writes all sorts of genres and in all kinds of styles. That just makes me want to read more of his stuff!

This book is pure horror. Make no mistakes about it. And not the airy, breezy, casual kind either. This is hardcore stuff. The trigger warning for this book is not to be taken lightly. It is weird and gruesome and progressively more terrifying. A survivalist father with two preteen daughters, teaching them how to survive in the great outdoors with nothing but the clothes on your back. It isn’t exactly easy, because he’s harsh. And deluded. And murderous. Oh, and he’s police, too. That makes it an altogether scarier concept because traditionally, a policeman or a father figure is someone you can trust in such stories. Not here.

Their survivalist challenges and tests get more difficult as the story progresses, culminating in a trip full of insanity and gore. It is more frightening by the fact that it is possible. It isn’t fantastical horror, but you can see this thing maybe happening, a freak situation in reality. Often, truth is stranger than fiction, and we’ve read improbable happenings in the world. This is what it’s like.

I think the ending is open to interpretation, but saying anything about it would be a spoiler. Let me know what you thought of it, though!

All in all, a pretty weird book. But you’d still read it. You know the kind of thing I mean. That painting you can’t stop looking at, the movie you can’t tear your eyes away from..the book you can’t not read.