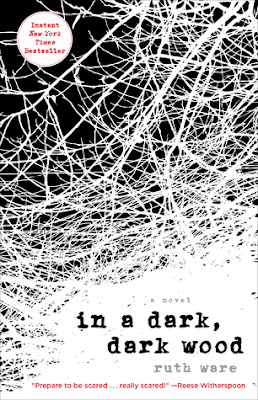 In a Dark, Dark Wood by Ruth Ware
Rating: 2 of 5 stars

In a dark, dark wood

Nora hasn’t seen Clare for ten years. Not since Nora walked out of school one day and never went back.

There was a dark, dark house

Until, out of the blue, an invitation to Clare’s hen do arrives. Is this a chance for Nora to finally put her past behind her?

But something goes wrong. Very wrong.

And in the dark, dark room….

Some things can’t stay secret for ever.

Psychological thriller, yet again. I love ’em. There’s no denying it.

This one, however, is not as exciting as I thought it would be from the blurb. I have a weakness for blurbs. That is not to say I won’t be reading more books by Ruth Ware, because I will. It’s just that I expected a little more substance from this book than I actually got.

It was a fairly predictable and derivative storyline. I’ve seen her being compared to Agatha Christie, and I am disappointed with such comparisons. She is not Agatha Christie. Nobody can be. But with such a lofty comparison, I expected a bit more substance in this book. There has to be more of the psychological bit in it, and it wasn’t there. It just was not. When you call it a psychological thriller, there has to be a modicum of mystery invloved in the whole story and process.

The ending felt contrived and predictable, and the second half of the book was a drag. The beginning draws you in, and raises expectations, but the rest of the book doesn’t live up to it. There is a psychological aspect, but it felt forced and did not flow smoothly. The ensemble cast is well-sketched out, and the characters have believable personalities and reactions. But it just doesn’t fit. Maybe my bar for psychological thrillers is too high, but here’s the thing – I want to like these books. So if I do not, there’s probably something missing from it in my opinion.

I see that it’s been optioned for a film, which makes sense. It does have that quality that would make it look good on screen. And for film, it will have a tighter storyline too. That should help.

All in all, not a great book, but I’ll be reading more stuff by Ruth Ware, in the hopes that I’ll like it better.