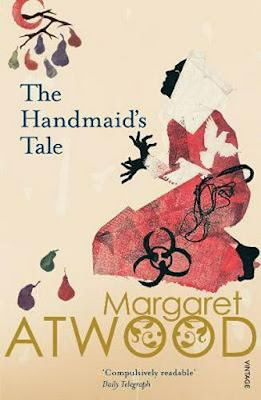 The Handmaid’s Tale by Margaret Atwood
Rating: 3.5 of 5 stars

Offred is a Handmaid in the Republic of Gilead. She may leave the home of the Commander and his wife once a day to walk to food markets whose signs are now pictures instead of words because women are no longer allowed to read.

She must lie on her back once a month and pray that the Commander makes her pregnant, because in an age of declining births, Offred and the other Handmaids are valued only if their ovaries are viable.

Offred can remember the years before, when she lived and made love with her husband, Luke; when she played with and protected her daughter; when she had a job, money of her own, and access to knowledge. But all of that is gone now…

The Handmaid’s Tale shows us a totalitarian theocratic society that follows the old testament and overthrows the government.

A haunting tale of a possible dystopian future. Well, dystopian for women. The men don’t seem to be having a great time either. However, from the limited number of men that I’ve seen in this book – even across class lines – they don’t have it that bad. Possibly the “lower” ones may, but we haven’t been given much detail on that front.

The premise is engaging from the very beginning. I’ve noticed that dystopian novels often have well-demarcated strata in society. This one’s no different. I’d really like to see a dystopian novel that doesn’t have clear cut factions. Anyway, this one does.

They are extremely orthodox and follow the Old Testament quite literally, and that’s what the whole setting is about. Looking at people too long, reading books, and even whistling, apparently, are things one should not do.

Offred is the main character and I must say I didn’t really like her as much as I would have liked to. I want to like a protagonist. I always do. But something just didn’t work for me in this book, not least that I was just not able to empathize with Offred much. What has happened to her is quite horrifying, and I do sympathize. However, she vacillated between suicidal thoughts and resignation, and I wasn’t sure how to feel.

The aforementioned strata all have different clothes and pretty much every woman, irrespective of faction, has to be covered whenever outdoors. Also, there is a scene where there are visitors from other countries, who apparently do not have any such clothing restrictions while being in this country. That sounds weird because don’t you think a country with such intense rules would make it extremely hard for visitors to enter? And the ones who were allowed would have some rules to follow, too?

The story flows well and as readers we go along with it, but if you actually think about it, there’s a lot that doesn’t make sense. The protagonist goes from having all the freedom in the world – job, family, kid, choice of clothes and hobbies and whatnot – to being utterly subservient in this puritanical society with rigid rules. It just doesn’t work for me. Change doesn’t happen that quick, I feel.

I’m great at suspension of disbelief but I just couldn’t do it for this book, as much as I would have liked to. I mean, I like dystopian fiction already. I want to like these books.

One thing though – the writing style is beautiful and Atwood strings together words like poetry. If you don’t like run-on sentences, you may not agree with this opinion. But for me, random thoughts leading to more randomness, all connected in some weird tenuous way – I loved it.