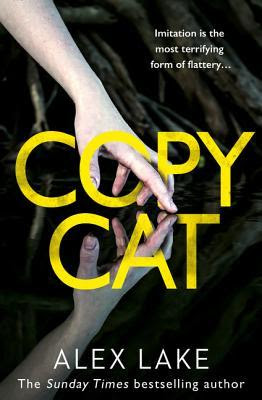 Sarah Havenant discovers–when an old friend points it out–that there are two Facebook profiles in her name.

One, she recognizes: it is hers. The other, she has never seen. But everything in it is accurate. Recent photos of her and her friends, her and her husband, her and her kids. Even of her new kitchen. A photo taken inside her house.

She is bemused, angry, and worried. Who was able to do this? Any why?

But this, it soon turns out, is just the beginning. It is only now–almost as though someone has been watching, waiting for her to find the profile–that her problems really start…

Plus, this is the first book I’ve read by Alex Lake, and while I’d heard good things, I wasn’t sure. But my worries were for naught and I thoroughly enjoyed it. Thing is, it’s pretty difficult to review such books without inadvertently giving away a spoiler or two. If you try ensure you won’t, the review is often quite vague. So I’d rather err on the side of vague, and keep reviews spoiler-free.

This story focuses on Sarah Havenant, an all-round good person. She’s a wife, mother and doctor, with a good social life in her small town. But someone’s been messing with her. Impersonating her on Facebook, setting up play dates with her friends, and getting books delivered by Amazon Prime. It’s essentially digital gaslighting, which, in this age of oversharing, doesn’t seem like a stretch of imagination. I like that the situation created is quite believable.

People start to believe that it is actually her doing this, and she wavers between doubting herself and being confident that she couldn’t have. I can’t disclose anymore without it being a spoiler, but it gets very intriguing at a point where it seems like we, as readers, are unsure what to believe. Red herrings do exist in this tale.

The reveal, while good, was a slight letdown. This is by no means saying it wasn’t a good story. I really liked it. The end was fast paced and interesting. I only say the reveal was a letdown. I had figured out what was happening so maybe that’s why I felt this way. Not too early, but before it was disclosed I did figure it out. If I hadn’t, maybe I would have been more surprised. But as it stands, I wasn’t.

The why was interesting, too. I did like it, but it could have been..more. More what, you ask? Well, nothing in particular. Just..more. I was slightly dissatisfied with the reveal and the why.

Apart from that, it was a fun read and I breezed through it in a couple of days. Unputdownable seems about right. Check it out though, it’s a fun read nevertheless.