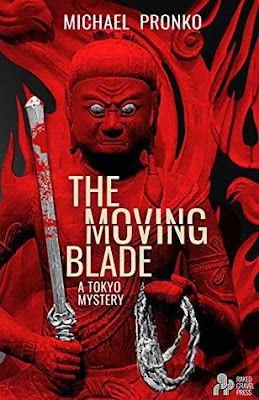 The Moving Blade  by Michael Pronko
Rating: 5 of 5 stars

When the top American diplomat in Tokyo, Bernard Mattson, is killed, he leaves more than a lifetime of successful Japan-American negotiations. He leaves a missing manuscript, boxes of research, a lost keynote speech and a tangled web of relations.

When his alluring daughter, Jamie, returns from America wanting answers, finding only threats, Detective Hiroshi Shimizu is dragged from the safe confines of his office into the street-level realities of Pacific Rim politics.

With help from ex-sumo wrestler Sakaguchi, Hiroshi searches for the killer from back alley bars to government offices, through anti-nuke protests to military conspiracies. When two more bodies turn up, Hiroshi must choose between desire and duty, violence or procedure, before the killer silences his next victim.

THE MOVING BLADE is the second in the Tokyo-based Detective Hiroshi series by award-winning author Michael Pronko.

While this book is a sequel to The Last Train, it can be read as a standalone novel. I, however, chose to read them in the order they were written. It was enjoyable for me to know their stories and to know why their interpersonal relationships were such. However, even if you do not read them in order, it’s completely fine, because there is enough explanation and information about all the characters. As I mentioned in the review for The Last Train, I am absolutely fascinated by Japan. This book took me deeper into the Japanese culture and I loved it! Michael Pronko has a deep knowledge of Japanese culture and a beautiful way with words.
The Moving Blade was extremely gripping. It has a wonderfully smooth flow as well as intense moments of thrill interspersed throughout. What I notice about both his books is how his story tends to involve many overarching themes about the reality of life, culture and thought processes in Japan. This is something I haven’t found in many books I have read recently, and I am absolutely delighted. It was a real eye opener for me, as I’ve never been to the country (but most definitely want to) and this was very comprehensive. It was a delight to read about their rituals, language styles and behavior; neatly woven into the narrative. The story itself features Hiroshi with his band of fellow detectives, and they’re off to unearth some more of Japan’s many hidden secrets. Of course, the truth always comes at a price and it’s no different in this book. There isn’t a dull moment anywhere in this tale. The title itself is a reference to swords, which are a sort of recurring character here. The story starts with Bernard Mattson’s death – the questions of why and how he died, and what implications it has for Japan, make up a big part of the story. As the story unfolds, we are introduced to a multitude of well-written characters. Bernard’s daughter Jamie has come to Japan for the funeral, and there are sinister elements at work. You don’t know whom to trust, and everyone seems to have an agenda.
All of this combines to form a rich narrative tapestry, and I thoroughly enjoyed this book. I recommend it to fans of Japan, culture, murder mysteries, political thrillers, and honestly, just all sorts of book lovers in general. Thank you so much for giving me an opportunity to read this, Mr. Pronko. I’ll be coming back to these books over and over again.