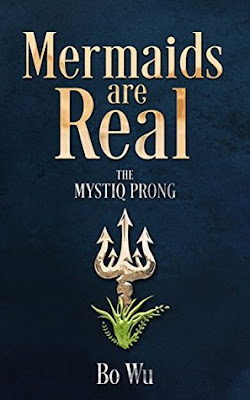 Mermaids are Real : The Mystiq Prong by Bo Wu
Rating: 4.5 of 5 stars

Benji Fisher has spent the first twelve years of his life growing up in a small fishing town Topside. He’s gotten used to the gang of dolphins who follow him on his surfboard and the voices he hears under the water; odd things that have, in their repetition, become part of normal everyday life.

However, none of that prepares him for the recruitment speech he gets from an octopus named Octavius and three of the dolphins the night before his thirteenth birthday.

What would you do if your ‘calling’ in life required you to take a leap/dive of faith? Would you take the plunge?

Sometimes, I am really grateful that I review books, because it makes me find new books I may not have come across otherwise, or even made myself read to the end. If it wasn’t a review copy, I may not have known of it, and that would be a shame because this book was amazing. The world building was absolutely fantastic and I adored the concept and level of details.

It starts off immediately interesting, and we are introduced to Benji, whom bullies call the fishboy. He can hear the classroom goldfish, who also calls him fishboy. (Fishes in this book are quite sharp and sarcastic.)

But hey, it isn’t an insult, after all! Benji finds out that he is actually a merman, and his destiny is to wield the Mystic Prong, as he is one of the last Mystiquariens. All the mermaids live in Aquari, the oceans and seas. Us humans are called Topsiders, as compared to their underwater existence.
Mr. Wu has described aquatic life so so beautifully – fishes, sharks, whales, eels, corals reefs, and of course, the mermaids. Their homes, and traditions, and the color of their scales. Evocatively described and very beautiful. I sometimes went off re-reading those passages because they were so beautiful. Not joking, I did want to go visit. If you’re a mermaid, you are allowed to invite a Topsider to Aquari, so I’ll keep my fingers crossed in case any mermaids are reading this.
Being a Mystiquarien, he has powers. I will not elaborate, because it’s a big part of the story, but it’s superbly executed and written by Mr. Wu. Benji has some new friends in Aquari who help him figure things out and harness his powers for the good.
Minor characters are also well fleshed out, and the story definitely has a lot of depth. I especially like the narrative about how us Topsiders aren’t taking care of Nature as much as we keep taking from it and using it for our benefit.
I would love it if more people read this book. Maybe a different perspective, like this book has, will encourage people to be a little more mindful. After all, humans aren’t the only creatures on the planet! Mr. Wu has wrapped up this message in an wonderfully detailed fantasy story.
As the book ends, the loose ends are neatly tied up, and yet there is enough for a sequel (which I eagerly await, if the author chooses to write one).
If there is just one negative about this book, it would be this – sometimes the sentences got a bit clunky and slightly disconnected. And there were a couple of instances where characters weren’t really introduced but suddenly part of the conversation. I was confused at those points and wondering where these guys showed up from. However, these are small things that can be rectified by an editor.
The story still remains, in my opinion, well-written and humble and thoughtful and detailed, all at the same time.

4 thoughts on “Review : Mermaids are Real : The Mystiq Prong by Bo Wu”