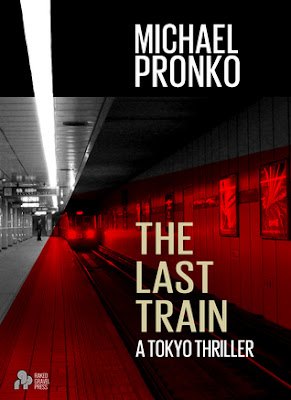 The Last Train by Michael Pronko
Rating: 5 of 5 stars

THE LAST TRAIN is the gripping new Tokyo-based mystery by multi-award-winning author Michael Pronko.Detective Hiroshi Shimizu investigates white collar crime in Tokyo. He’s lost his girlfriend and still dreams of his time studying in America, but with a stable job, his own office and a half-empty apartment, he’s settled in.When an American businessman turns up dead, his mentor Takamatsu calls him out to the site of a grisly murder. A glimpse from a security camera video suggests the killer was a woman, but in Japan, that seems unlikely. Hiroshi quickly learns how close homicide and suicide can appear in a city full of high-speed trains just a step—or a push—away.Takamatsu drags Hiroshi out to the hostess clubs and skyscraper offices of Tokyo in search of the killer. She’s trying to escape Japan for a new life by playing a high-stakes game of insider information. To find her, Hiroshi goes deeper and deeper into Tokyo’s intricate, ominous market for buying and selling the most expensive land in the world.When Takamatsu inexplicably disappears, Hiroshi teams up with ex-sumo wrestler Sakaguchi. They scour Tokyo’s sacred temples, corporate offices and industrial wastelands to find out where Takamatsu went, and why one woman would be driven to murder when she seems to have it all.After years in America and lost in neat, clean spreadsheets, Hiroshi confronts the stark realities of the biggest city in the world, where inside information can travel in a flash from the top investment firms to the bottom of the working world, where street-level punks and teenage hostesses sell their souls for a small cut of highly lucrative land deals.Hiroshi’s determined to cut through Japan’s ambiguities—and dangers—to find the murdering ex-hostess before she extracts her final revenge—which just might be him.

I absolutely love love love this book. One of the best, most well-written books I’ve read in a long time. I am rethinking all the previous 5 stars ratings I’ve given and trying to figure out where they stand now. That’s how good a book is this. Wonderfully​ evocative with great narrative style, I enjoyed every single sentence of this book. We are introduced to Hiroshi and his fellow detectives, who are trying to figure out just how exactly so many men are ending up dead. Death by The Last Train. The title is quite apt.
We also meet Michiko. A hostess with impeccable financial savvy. The more I got to know Michiko, the more I came to like and respect her. She’s a wonderful person, and circumstances hadn’t been kind to her. Hiroshi is a very likeable character, an all round good guy who is trying to do the best he can. Unfortunately, once again, circumstances don’t always allow one to do so.
Japan is a land of formal language, social graces and general politeness. In this book, things are often hidden out of sight because it’s too ugly a reality, one that they aren’t willing to face. But sometimes, some people do have the courage and determination to bring it to the fore. It isn’t easy, it isn’t comfortable and it’s often lethal. This story delves into a much larger plot than we, as readers, might initially presume. It flows so beautifully that it seems like a very natural progression to the tale. I haven’t read a story like this in a long time and I am all the more appreciative of it for that reason. I have been fascinated with Japan lately and this book taught me a lot about their language and culture and customs. Now, I am even more fascinated than I was before. I know I’ve said this before, but I loved the narrative. I also appreciated how the story moved between past and present so neatly, and at the most apt junctures, too. A beautiful narrative, not a dull moment, and no loose ends, it’s a wonderfully written story and I am grateful to have read it. I recommend it to fans of Japan, culture, murder mysteries, strong female characters, and honestly, just all sorts of book lovers in general. Thank you so much for giving me an opportunity to read this, Mr. Pronko. I’ll be coming back to these books over and over again.