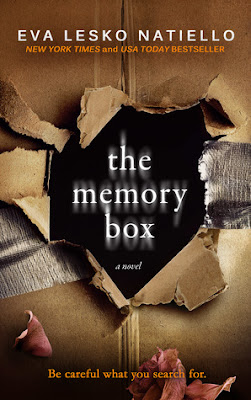 The Memory Box by Eva Lesko Natiello
Rating: 2 of 5 stars

What would you do if you Googled yourself and discovered something shocking?

In this gripping psychological thriller, a group of privileged suburban moms amuse themselves by Googling everyone in town, digging up dirt to fuel thorny gossip. Caroline Thompson, devoted mother of two, sticks to the moral high ground and attempts to avoid these women. She’s relieved to hear her name appears only three times, citing her philanthropy. Despite being grateful that she has nothing to hide, a delayed pang of insecurity prods Caroline to Google her maiden name—which none of the others know.

The hits cascade like a tsunami. Caroline’s terrified by what she reads. An obituary for her sister, JD? That’s absurd. With every click, the revelations grow more alarming. They can’t be right. She’d know. Caroline is hurled into a state of paranoia—upending her blissful family life—desperate to prove these allegations false before someone discovers they’re true.

The disturbing underpinnings of The Memory Box expose a story of deceit, misconceptions, and an obsession for control. With its twists, taut pacing, and psychological tenor, Natiello’s page-turning suspense cautions: Be careful what you search for.

I was unable to decide between enjoying the story or being super frustrated by the narrative.

I really try not to write any negative reviews here because I believe every author has worked hard on their book and it’s a labor of love. If I don’t like the book, maybe it’s not for me. It’s probably not the authors’ or the book’s fault. They’ll find their audience.

But here, I felt like I was lied to. They told me it’s like Gone Girl. When you say that, people usually go – oh, I fall in​ that audience so I’ll probably like this one too. Well, you probably won’t.

I am writing a negative review because I feel people deserve fair warning before having to pick up this book. I’d rather they didn’t pick it up at all.

I like how the book started. It was pretty exciting till about halfway through. It then proceeded to go downhill. Some instances were pretty weird – for example, Caroline reads a bit of the Google search about her maiden name. She freaks out. The freaking out is quite intense and it kind of drains your energy as a reader. I can’t imagine how the author felt while writing it.

She goes back to that Google search, reads a few more lines, repeat. And again. And again.
My question – Why didn’t she just read the whole article in one go? Was it so the book could be longer if she freaked out multiple times?

The book then proceeded to develop a unreasonable combination of events and spiraled into an absolutely unsatisfactory ending.

I don’t understand how this is an NYT bestseller, and I disagree with the summary saying it’s a gripping psychological thriller. It is just extremely draining because she keeps freaking out so much.