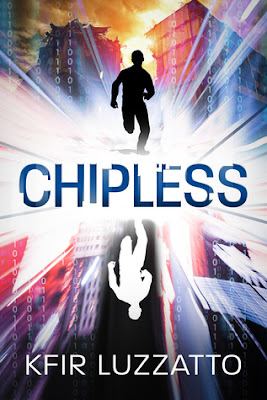 In a post-apocalyptic, dystopian society, health authorities implant a chip in the brain of every infant to prevent the spread of disease. But the rulers exploit the chip to manipulate the population and to create a distorted vision of the world. When Kal, a young physicist, accidentally discovers the truth about the chip, his life is in danger.

But Kal is not alone. Amber, a young, chipless girl from a distant society, who is on a personal mission, helps him to get away before the city police find him. The knowledge that Kal holds is a potent weapon against the tyranny of the rulers, and he has no choice but to join Amber and her fellow rebels in fighting them.

Kal and Amber escape together from the city, but the hunt for them is on. They must travel through dangerous, lawless territories to reach a safe destination. It’s a race in which time is running out for Kal. If they don’t make it in time, both his life and the hope of fighting the city tyrants will be lost.

This book is a dystopian Sci-Fi novel – both things that I love reading. I really enjoyed the story. Dystopian novels often have a great focus on world building and settings and concepts related to the world created. Chipless created a very good world, definitely. The concept was eerie, and yet very credible. I think credibility of a possible concept is important in dystopian novels, specially if they also have to do with Sci-Fi. The whole idea of The City and Freeland was very well constructed.

The book flowed well too, it was fast paced, situational and all towards a climactic end goal. What I didn’t like was the lack of time given to characters to process their emotions and feelings. Especially Kal, the lead, who has spent his entire life being indoctrinated by The City, surely it wouldn’t be so easy for him to give it all up?

We did see his hesitation and reluctance about many of the things that were foreign to him – different from his sheltered life in The City. But it was hard as a reader to believe that he accepted the new changes so easily.

Also, there were many supporting characters and Kal and Amber did bond with some of them. I’d have liked to see more interactions with those characters – not in terms of dialogue, but in terms of how they feel. Some dialogues were a bit off, but otherwise were mostly on point. Personally I think one may want to see more of the behind-the-scenes.

So it’s kind of a let down in that sense because Kal can read minds. There is so much scope for more in-depth characters because Kal can see their thoughts. Just seems like a missed opportunity.

I did love the ending and the way it keeps the story open to more. I say it again – loved the world building.

I must specify, I’m not trying to be harsh at all. I really did enjoy the book, but it’s because I enjoyed it so much that I would have loved to see the story arc cover more. It is true that we are harder on those for whom we want better. And I believe this story has a lot of potential and I’m excited to read the sequel.