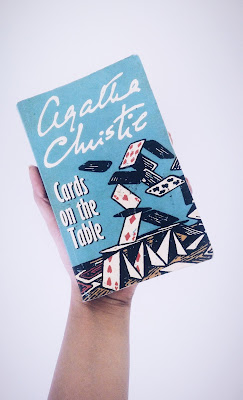 Cards on the Table by Agatha Christie
Rating: 4 of 5 stars

It was the match-up of the century: four sleuths–Superintendent Battle of Scotland Yard; Mrs. Ariadne Oliver, famed writer of detective stories; Col. Race of His Majesty’s Secret Service; and the incomparable Hercule Poirot – invited to play bridge with four specially invited guests, each of whom had gotten away with murder!

But before the first rubber was completed, the host was dead.

Another of the Christie classics. I’ve reviewed so many of her books​, by now you know I’m an absolute fan.

This is a pretty well written book, too. Many twists and turns and loops. I love that this was a more explicit study in psychology that most of her books. They all have a base in psychology, sure, but it was used very well here.

The characters were very well described, but I think that’s a classic Christie trait. They’re all real people with strengths, weaknesses and foibles. Here it was magnified as the murderer could only be one of four people and hence it was all the more difficult to figure it out. They all seemed to have their own reasons to hide, deflect or shield. There was a twist and then there were more twists!

I also noticed many instances of self deprecating humor and I just feel like Agatha Christie was much more amazing that we see from her work. I like to think she was just as irreverent as Mrs Oliver, and I may be romanticising here, but I’d also like to believe that it may give us a playful insight into her thought process while writing too. Just as Mrs Oliver didn’t really like her Finn, we know that Christie didn’t really like Poirot much either. Which made me feel maybe the other insights were at least slightly true too. And that made me sorta happy.

Overall, an amazing book with multiple twists and turns that keep you guessing till the very end.