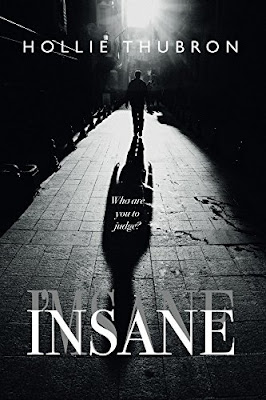 “My name is Avery Blake. I will be the hero for the next 300 pages. Well, in my opinion I will be anyway. After all, this is my story.

My primary occupation is as a pharmaceutical rep. I have to say I do love the sales and I definitely love the cash… But it doesn’t send adrenaline shooting through my body and make me bounce up and down like a kid in a sweet shop.

No, the things that really get me going include painting, volunteer work, killing, tap dancing and golfing.

Yes, you read that correctly.”

One person’s crazy is another person’s reality, with so much in this world being left to interpretation, is killing really wrong? Are serial killers really insane? Anyway, who are you to judge?

The locals of Southhurst would never dare wander the streets alone at night, since there has been a serial killer terrorising the area for fifteen years. But Avery Blake isn’t afraid.

Avery Blake is a serial killer. She kills because she enjoys it. But how long can she go on like this, before someone catches on?

Insane is a psychological thriller addressing the different perceptions of morality and what influences them.

I particularly enjoyed how the author delved into the minds of the narrators – the story alternated between two characters’ POV for the most part. Both the characters were real and raw, and at no point would you feel a lack of empathy with them. Even though Avery is a serial killer. We know it when we start reading and yet we empathize and like her. That’s not easy to pull off so kudos to Ms. Thubron yet again.

The chapters were pretty short and crisp, and most ended on an intriguing note – this made the story that much more fast paced and you’d want to keep reading to figure out what happens next.

And what of Harry, the cop who has made it his obsessive life work to catch the dreaded Grimm Reaper? Can he? Does he?

At the conclusion of the book, I was really looking forward to how the loose ends were going to tie in, and I kept going off on tangents and guessing the end. I am pleased to say I was unable to guess it. Even when I did reach that part of the story, the ending was still a neatly tied surprise.

This is an extremely well written book and it’s very hard to believe that this is the author’s debut attempt. I look forward to reading much more of Hollie Thubron’s work. If this book is anything to go by (and it most definitely is), what she writes is a work of art. Future books are only going to get better and better.

I especially love that she discusses the psychology of the story as well as the characters after the story ends – a background of the book itself, if you will. Each character is associated with a quality/feeling and I feel like that adds so much more to the depth of the book. Will be looking forward to more of her work in the future!