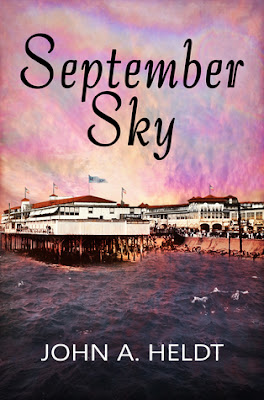 Book Summary:
When unemployed San Francisco reporter Chuck Townsend and his college-dropout son, Justin, take a cruise to Mexico in 2016, each hopes to rebuild a relationship after years of estrangement. But they find more than common ground aboard the ship.

They meet a mysterious lecturer who touts the possibilities of time travel. Within days, Chuck and Justin find themselves in 1900, riding a train to Texas, intent on preventing a distant uncle from being hanged for a crime he did not commit. Their quick trip to Galveston, however, becomes long and complicated when they wrangle with business rivals and fall for two beautiful librarians on the eve of a hurricane that will destroy the city.

Filled with humor, history, romance, and heartbreak, SEPTEMBER SKY follows two directionless souls on the adventure of a lifetime as they try to make peace with the past, find new purpose, and grapple with the knowledge of things to come.

Every bone in my body was begging Chuck and Justin to stick with the plans. I feared for them, or rather, what will happen once the damage is done. What will the future be like if they had involved themselves with the case. I was anxious for them.
The author wrote of the relationship between a young kid who had dropped out of college and a father who neglected his son. Justin was surprisingly mature and held no anger against his father, Chuck who had always been caught up with work. Justin’s parents were divorced and his mom passed away not too long ago, with the anguish of losing his girlfriend and the stress he felt from school – he needed a big break. Their relationship improved when the two of them agreed to travel back to the past – 1900. Of course, things won’t always go smoothly, would it?
The book was written with short chapters, usually in Chuck’s perspective. I would say, I was confused between Chuck and Charles Townsend, only to find out later in the book that Chuck was a nickname. Overall, it was an interesting plot and the way the author wrote it in short chapters makes the flow of the story very clear. I’d rate this book for Mature audiences because some parts sure gets steamy.
I enjoyed the book and admired the character’s desire to right a wrong. However, I couldn’t connect to the character well enough. I fear too much for the history that they want to change and how much it would affect the future. I wanted to stop reading it but halfway through, things gets better and it starts to get more interesting.
I am just upset that there was no relationship development between Chuck and Justin in the story. It was hinted by the fact that they were up to date with what happened with each other’s lives but I want more. I want to see them make up for times that they’ve lost, visit places in 1900s together, go out and eat together, and just them alone. I also didn’t like the ending but it was a pleasant one. After all that they had gone through, they should be happy in the end.
The slightly lower rating is because it does take a while to get into the book. I did enjoy the story despite finding it a little hard to continue reading it at first. It sure does become more interesting towards the end.

This review written by – Jo