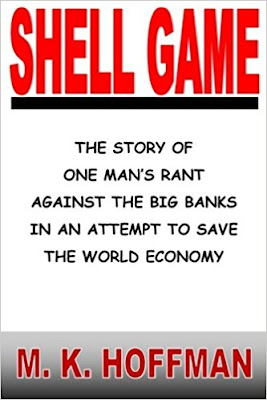 Shell Game: The Story of One Man’s Rant Against the Big Banks in an Attempt to Save the World Economy by M.K.Hoffman
Rating: 5 of 5 stars

In the modality of the times, everyone wants to pass the buck and then pass judgment on the other guy; to sit back suffering, complaining and acting like there is nothing to be done. It is so rampant that businesses use this to bilk us out of trillions of dollars.

The mighty Roman Empire did not fall because they were defeated in battle. They fell because corruption was rampant and accountability was all but non-existent. We are headed down the same path.

The author reached out to me about reviewing this, and as you all know, I don’t usually read non fiction. But the title and premise intrigued me and I’m so glad I chose to review this. It is an extremely well written book and any layman would understand the concepts laid out in the book because he has explained it so beautifully.

Shell Game starts with a background of the writer, who is a Nam veteran. I would like to take a moment to respect his effort and patriotism; both while he was in the Army, and after he left. His manner of writing is so different from most other books I’ve read. Always the first person present tense, always drawing you in – so that you always want to know more. It spans from 2006-2018 and not once did I feel a single paragraph was unnecessary.

M.K. Hoffman has a keen grasp of macroeconomics and explains each and every concept so lucidly that I can ensure every single person who picks this book up will understand what he means even if they’ve never read a word of economics before. He makes it interesting and intriguing, and his tone and method of writing are such that it feels like a friend is explaining it all to you.

But often, his real life friends, acquaintances, and connections either do not understand or outright ignore his attempts. I could feel the frustration emanate from him while reading those parts. Here’s a guy trying to make a difference, trying to right a really huge wrong. He’s a committed guy and keeps trying to make a difference by reaching out to the powers that be. You can actually feel his distress when he goes from one governmental organization to the other – be it the FBI, Department of Justice, New York State, the U.S. Attorney, and even the White House! He tries so hard to bring justice to the millions of citizens around the world affected by the shadowy figures that pull the strings and create havoc with the state of the world in general – just so they can get richer, and they’re all already enormously rich. What happens next, I won’t say – read the book!

But I do think that one has to give credit to him – apart from trying to save the economy, he does so many things, so many different jobs and areas of expertise, so many different hobbies – a well-rounded guy. I really respect him and think he’s an all round awesome guy. And I’m honored to have received a review request from a guy like him.