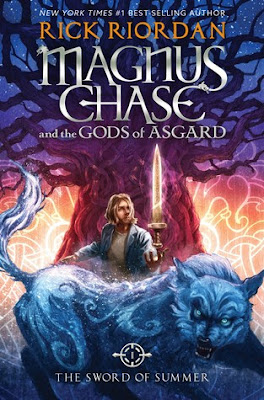 Book Summary:
Magnus Chase has always been a troubled kid. Since his mother’s mysterious death, he’s lived alone on the streets of Boston, surviving by his wits, keeping one step ahead of the police and the truant officers.

One day, he’s tracked down by a man he’s never met—a man his mother claimed was dangerous. The man tells him an impossible secret: Magnus is the son of a Norse god.

The Viking myths are true. The gods of Asgard are preparing for war. Trolls, giants and worse monsters are stirring for doomsday. To prevent Ragnarok, Magnus must search the Nine Worlds for a weapon that has been lost for thousands of years.

When an attack by fire giants forces him to choose between his own safety and the lives of hundreds of innocents, Magnus makes a fatal decision.

Sometimes, the only way to start a new life is to die…

Book Review:
The ever-so-famous mythology author Rick Riordan strikes again with another page-turner, this time, he teaches us about Norse Mythology with the protagonist, Magnus Chase.
The protagonist is a sarcastic young demigod who lost his mother to wolves. Being an orphan living on the streets with his two friends, Hearth and Blitz who he treated as his only family, he never felt like he belonged anywhere. Neither did he feel safe. Well, unfortunately for him, his true adventures and battles start after his death.
I would love to say that this book was an easy read, funny and lighthearted – the ideal book to calm down with after a very stressful day. Unfortunately, this book was jam-packed with adventure, difficult to pronounce names that they had to include a pronunciation guide as well as exciting events happening on every flip of a page. It makes you eager to read yet dread the future faced by the young demigod on his journey.
There were times when the friends had to sacrifice themselves for the other to continue on, there were times when their loyalty was questioned and times when they proved their bond. Different ‘cultures’ (or should I say ‘creatures’) have different expectations for their own kind and each one of them faces their own battles, with the help of their friends of course.
Fortunately, this is not the end as the series continues on with the next book, the Hammer of Thor.
This review written by – Jo