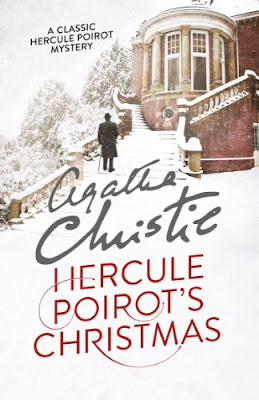 Hercule Poirot’s Christmas by Agatha Christie
My Rating: 5 of 5 stars

Book Summary:
Motives for Murder: A fortune in uncut diamonds, hidden by an eccentric old man – A woman’s love, too freely given – A business empire built on ruthlessness.

Each of them may have been a motive for the brutal slaying of wealthy old Simeon Lee. Coupled with Lee’s family, each member of which hated him and wished to see him dead, they present Hercule Poirot with a baffling challenge–one which the astute detective solves only through his uncanny ability to see “the little things.”

Book Review:
Another stunner from Agatha Christie. I do love that woman so.

I especially like the dedication to her brother-in-law​ in the book. Here it is –

You have always been one of the most faithful and kindly of my readers and I was seriously pertubed when I received from you a word of criticism.

You complained that my murders were getting too refined – anaemic, in fact. You yearned for a ‘good violent murder with lots of blood’. A murder where there was no doubt about its being murder!

So this is your special story – written for you. I hope it may please.

Yet who would have thought the old man to have had so much blood in him?

Macbeth
From there itself you just know it’s going to be a treat. But we can expect no less from the queen of mysteries!

I have read quite a bit of her works, and by now I’ve learnt that you can eliminate nobody from suspicion. So this time I was extremely attentive and I just knew I had to pay attention to every sentence and every word said by absolutely anyone. Even expressions​ and reactions.

And yet I was not prepared for the bomb she dropped in the end! I still was unable to wrap my head around it. I knew some of the things she foreshadowed, yes. I picked up on a few hints here and there. But alas, I could not figure out the identity of the murderer. And I was as shocked as any of the characters in the book when I did find out.

Read this book, pay attention to each and every character. I did, but she outpaces most. Use the little grey cells, Mon Ami. They will lead you to it.

It’s such fun trying to solve the mystery with Poirot, sometimes I succeed, but sometimes I really do not. This was one of the instances where I totally did not, but I’ll tell you what – I usually enjoy the story much more when I do not! I think it’s the satisfaction of a well woven yarn that I just cannot get enough of.

This woman has a way. Nobody has come close. As always, no spoilers about Agatha Christie.