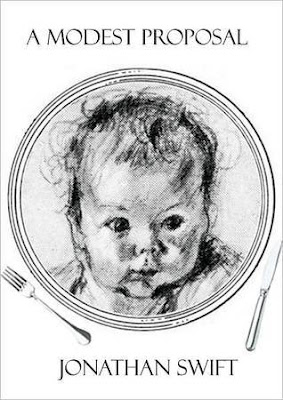 A Modest Proposal by Jonathan Swift
My Rating: 3.5 of 5 stars

Book Summary:
A Modest Proposal for Preventing the Children of Poor People in Ireland From Being a Burden to Their Parents or Country, and for Making Them Beneficial to the Public, commonly referred to as A Modest Proposal, is a Juvenalian satirical essay written and published anonymously by Jonathan Swift in 1729.

Swift suggests in his essay that the impoverished Irish might ease their economic troubles by selling children as food for rich gentlemen and ladies. By doing this he mocks the authority of the British officials.

A Modest Proposal is included in many literature programs as an example of early modern western satire. It also serves as an exceptional introduction to the concept and use of argumentative language, lending itself well to secondary and post-secondary essay courses.

Outside of the realm of English studies, A Modest Proposal is a relevant piece included in many comparative and global literature and history courses, as well as those of numerous other disciplines in the arts, humanities, and even the social sciences.

Book Review:
This is a short satirical essay, so of course it is not to be taken seriously. But it is so so creepy that I felt quite weird while reading it. Another one of my discoveries through Serial Reader, and I am quite creeped out. I know I said that before but it’s literally the only word for it.

The whole gist of this essay is to propose a solution to the overcrowding problem prevalent on our earth in some indeterminate time in the future.

The proposal is such – cannibalism. Eat babies.

But this is not to be read for it’s shock quotient. The only reason to read this is to appreciate the satire, appreciate the seriousness with which this proposal is put forth.

Appreciate that whilst writing the proposal, the writer​ draws upon illustrative examples supported by people of renown who are practicing this already and hence support the proposal.

Appreciate the beauty of an author being able to write something of this aspect while obviously not supporting the very idea.

That is the beauty of fiction.

I am tagging this with a spoiler alert anyway because I have written about certain things but I’m not sure if it’s a spoiler as such, but on the safer side. It’s a very short read. Enjoy!