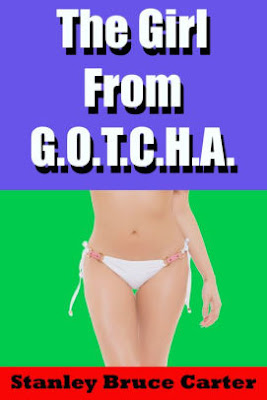 The Girl from G.O.T.C.H.A. by Stanley Bruce Carter
My Rating: 2 of 5 stars

Book Summary:
“The Girl From G.O.T.C.H.A.”, formerly titled “Miami Blast”, is a sexy Sixty-ish spy spoof about a time traveling bionic babe battling the evil agents of SPECTRUSH, as well as Emperor Caligula, Wyatt Earp, Jack the Ripper and a host of others.

Book Review:
An interesting read for those who are into science fiction with a side of history lesson and some graphic content. There are quite a few not-so-subtle nods at several pop culture elements. You might get a laugh or two at the funny abbreviations throughout the book for the various good and evil organizations. Some characters felt quite unnecessary except to show that the protagonist was oozing of sexy adventures and that mystery and danger followed her everywhere.

The writer certainly does not lack imagination. Some elements that were described in the story came out in a very entertaining fashion.

For example, history buffs might find a few moments that are interesting. The concept of time travel has been explored in a very safe yet, amusing way by the author.

There were other components of the GOTCHA girl’s universe that seemed like pretty interesting concepts too.

But good mysteries would make you identify with the protagonist and their logic. The writer would make you feel like you are part of the character who’s solving the crime. I’m disappointed to say that I did not get that feeling most of the time and felt like a watcher of a movie whose prequel I hadn’t watched. And there were times I went back to read some parts to check again how I did not understand certain thoughts or the logic the GOTCHA girl uses – some of them did seem a bit far fetched. It felt like the puzzles were being stretched a bit too thin just so that they fit together.

An overall cool story but the plot felt a bit slow. But my main concern was that there was no character development whatsoever in the entire book. If the GOTCHA girl wasn’t fighting crime and solving mysteries, she was in a bed with someone. Adventures and thrillers are fine but if you need the reader to thoroughly enjoy it, you should be able to explain the character to the reader and make them identifiable. So while the author has worked on the plotline and the universe, he also needs to pay attention to the characters.